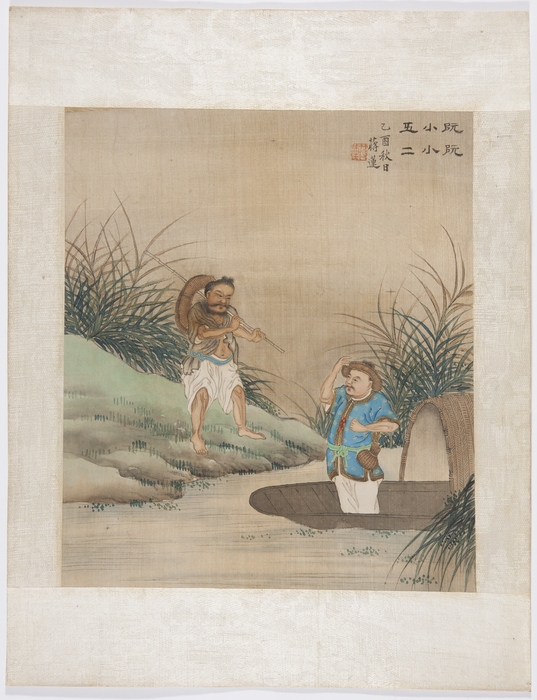 : Chinese painting on silk, one of a set of 12. 1 man in boat, another on land with bamboo pole. The 2 men, Ruan Xiaowu (阮小五) and Ruan Xiaoer (阮小二) are two figures of 'Tales of Water Margin' Shui Hu Zhuan, a famous novel of Ming Dynasty, one of the Chinese four great classical novels. Signed by the artist Jiang Lian (蒋莲) (1796-1840s from Zhongshan city, Guandong Province) and with his seal 'Jiang Lian (蒋莲)'. Dated 'The autumn of 1825 (乙酉秋日)'. Note by JY: Paintings depict the brotherhood of leaders described in the novel, The Tales of the Water Margin. There were 108 brothers. Those depicted here are the most famous. They had different roles - some were generals, others were officials - there are different stories about each one. Each one was outside the law for some reason. Jiang Lian painted in the style of Qiu Ying, a Ming dynasty painter and these are very Qiu Ying style therefore likely to be right. Qiu Ying was good at 'blue and green style' painting where blue and green are used for rocks and mountains.