Artists have always had reason to work away from their studios, necessitating the carrying of equipment and materials. The rise in popularity of the artist's watercolour box - a simple wooden portmanteau case for carrying paints, brushes and materials - from about the 1760s onwards facilitated a quick and easy way to carry everything needed to make a sketch.

Bristol owns seven artists' boxes, four in the Fine Art collection and three in Social History, and another is on long-term loan. The earliest dates to 1786 and was produced by Thomas Reeves & Son, of Holborn, London. This box (Mb7283), manufactured by the renamed company Reeves & Sons from 1829 until 1845, was probably never owned by a Bristol artist. But it is the nearest in terms of date to the one shown in Samuel Jackson's drawing A Sketching Party in Leigh Woods of circa 1830 (K2761). It was presented by the East India Company to a military cadet named Edward Ford in 1840, "as a mark of their approbation of his attainment in Drawing at the Company's Military Seminary." 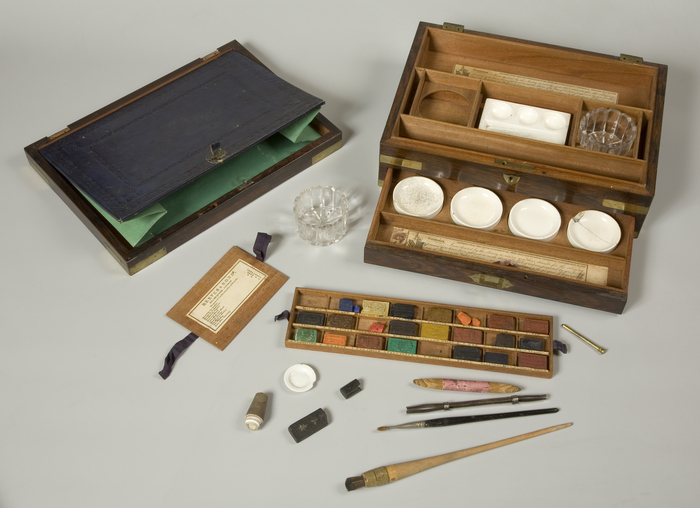 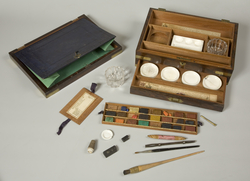 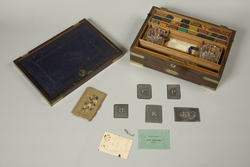 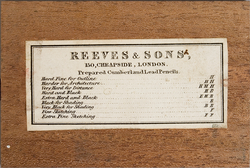 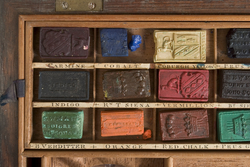 : an artist's watercolour box, made of wood with brass inlays, containing various tools and materials