The photographer is standing next to 110 Redcliff Street, owned by W D & H O Wills and Sons. The sign on the premises to the right states: D SYKE[obscured] / REDCL[obscured] / BREW[obscured]. In 1875, the main entrance of the Daniel Sykes & Co brewery was 107 Redcliff Street, just out of view in this photograph - see Mb6021. The building with its side wall covered in fly posters is 34 Redcliff Street, occupied along with no 35 by E Fear's furnishing warerooms. There appears to have been another building, or a lean-to, on this corner at one time, as evidenced by the broken wall visible under the posters and the rectangle of missing tiles on the roof. Behind the wall to the left, set back from the main road, was a starch works - the entrance to which is seen in Mb6016.

Some of the fly posters: Bradbury Sewing Machines Exhibition of Modern Paintings at the Bristol Academy for the Promotion of Fine Arts (now the Royal West of England Academy); Steadman's Hats; Caracas Cocoa (produced by Fry's of Bristol); Lee Undertakers; Newsome's Hippodrome and Circus (at Park Row); Bristol Mercury Daily Post. There is also a large number of posters advertising Whit Monday bank holiday excursions to places such as Clevedon, Weston, Bath, Portishead and Bournemouth. Whitsun, the popular name for the festival of Pentecost, falls on the fiftieth day (the seventh Sunday) after Easter and generally occurs in May or early-June. In 1875, Whit Monday fell on the 17th May. Therefore, this photograph, and the others in the series, was probably taken in early-May, 1875. This makes sense in terms of the light needed to create a decent exposure on the glass plate negative. Note the bright patch of sunlit cobbles in the foreground.

Just beyond the last of the clearly visible buildings on the left, are the outlines of two male figures, who have probably stood for a few seconds to watch the photographer at work, before wandering off. 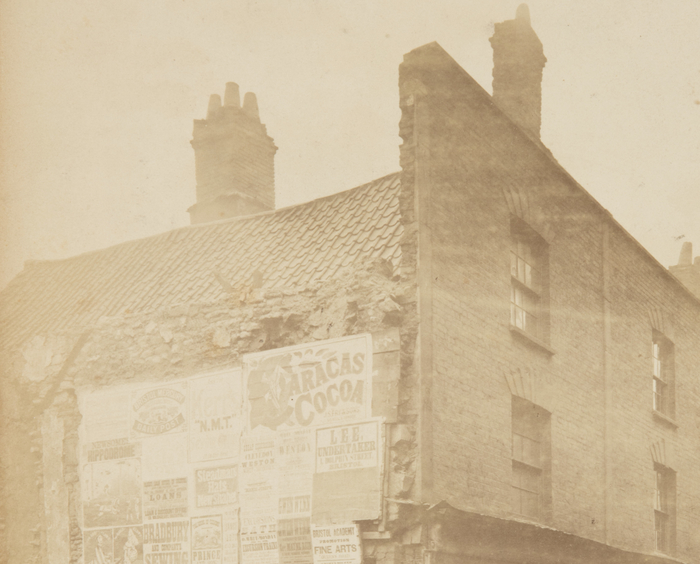 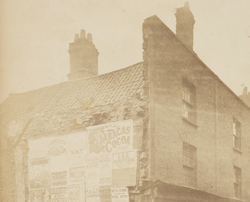 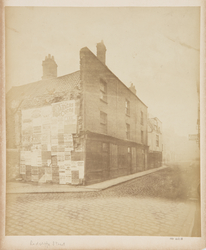 : a sepia colour photograph, showing: a view of Bristol, taken from near 110 Redcliff Street