The photographer is standing near to 136 Redcliff Street, the premises of the Severn and Canal Carrying Co. The buildings on the west side of the street (the right-hand side in this photograph) back onto the Floating Harbour at Bull Wharf and Dundas Wharf. The narrow gap between the buildings to the left is the entrance to Little Thomas Lane. To the right of the lane is no 17 Redcliff Street occupied in part by Neat & Co. The sign on the wall above the barred windows states: NEAT & CO. / TRIPE / Manufacturers / WHOLESALE / & for Exportation

The other part of the building was occupied by Francis T Jackson's Birmingham goods warehouse. To the left of the lane, set back from the road and with window blinds, is 16 Redcliff Street occupied by S & J Newman, cabinet makers, and W Inch, japanner. Little Thomas Lane stretched eastwards to the graveyard of St Thomas Church, before turning right to join up with Thomas Lane. There are no addresses listed for it in trade directories of the time, meaning it was just a narrow thoroughfare. The corner was blocked off in 1957. In 2020, the location of the lane would be underneath the foyer of the Bristol Civil Justice Centre, but the section running alongside the church still exists.

Sarah Neat (nee Scrase, 1789-1863) joined her husband in the business in 1846, and, after William died, carried it on under under her own name for the last few months of her life (she died on 11 February, 1863). The beneficiaries of her will were a relative, Samuel Scrase, and a George Phelps. Both beneficiaries worked in other trades and were unlikely to have carried on the business. It is probable that it was sold on, with the new owners retaining the reputable name as a way of keeping longstanding customers. In 1879, Neat & Co moved to 147 Temple St, where, around 1882, the name changed to Neat, Marshall & Co. It closed altogether in 1895.

Eight months after this photograph was taken, on the 19 January, 1876, Neat & Co was visited by a Dr Ballard who was researching and recording the discharge of effluents, or effluvium nuisances, into the nation's drains and sewers on behalf of the government 2. Dr Ballard doesn't actually record what he saw at Neat & Co, but the description below is taken from the same report, describing a comparable tripe manufactory in Leeds. It gives an idea of what was going on inside 17 Redcliff Street:

Tripe, which is the first stomach of the ox or sheep, undergoes some preparation before being boiled for human food. The contents of the stomach having been emptied out (which is usually done at the slaughter-house), the tripe is washed and scalded, and the interior villous membrane is then scraped off. This operation of scraping is usually performed by women, or sometimes by men, at a table on which the tripe is laid, and by hand with an appropriate scraper ... this operation is effected by means of a cylindrical-shaped brush with stiff bristles, revolving in a trough through which water constantly runs from a tap above. The workman cleans the tripe by pressing the surface against the brush as it revolves. The tripe is then boiled, usually in an iron pan set in brickwork and heated by a fire beneath. The fat is skimmed off and set aside for use by soap-boilers ... boiling is effected in steam-jacketed pans. When the tripe is sufficiently cooked it is set aside or hung up to cool, and the liquor is run off and discharged into the drains.

The large building with the arched entrance opposite Neat & Co was the bonded warehouse at Dundas Wharf. In 1875 it contained a corn warehouse (to the left of the arch) and a distillery (to the right). Standing next to the arch there is the blurred outline of a man dressed formally in top hat and long coat. A little further on, next to the doorway of no 128 Redcliff Street, the premises of Edwin Jones & Co, Iron Foundry, there is a worker. The angle of the sharp triangle of light emanating from Little Thomas Lane (from the east) confirms that this photograph was taken during mid-morning.

1 The other two tripe businesses were both located in St James Back, which was just off Silver Street behind the old Bridewell Police Station. / 2 Report in Respect of The Inquiry as to Effluvium Nuisances Arising in Connexion with Various Manufacturing and Other Branches of Industry, by Dr Ballard, published 1882, HMSO, London. 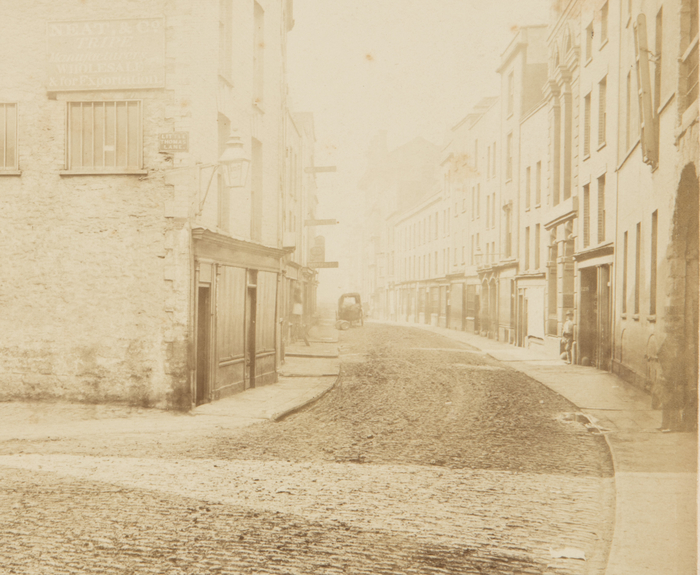 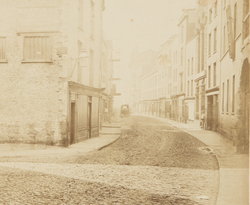 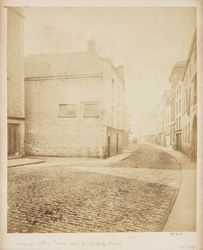 : a sepia colour photograph, showing: a view of Bristol, taken from near 136 Redcliff Street