The photographer has moved his camera into the middle of the road a short distance along from where Mb6018 was taken. The wording on the Daniel Sykes & Co brewery sign is now clearly visible and the street number 107 is seen above the main entrance. This building dated to 1640 and became a brewery in 1775 1.

Opposite the brewery is the Little Ship inn at no 37 Redcliff Street, licensed to Henry George James who was its publican from 1872 until it closed in 1878. There is a curious frame next to the window above the entrance, which is completely empty, probably an old sign. There is also a prominent Daniel Sykes & Co sign in its lower-left-hand window, meaning the Little Ship didn't have far to go for its beer. In fact there is a delivery in progress, as shown by the hand-pulled dray cart. Two barrels, one standing and the other on its side just around the corner, have been rolled off the cart using the two small planks. It is clear that the men making the delivery, perhaps fearing the eye of their employer across the road, have carried on working while the photograph was taken. The figure in the white jacket standing next to the cart has moved during the exposure and become blurred. Ans the standing barrel has been turned on its side by a ghostly figure and rolled along to the corner of the pavement, making it look as though there are three barrels in the photograph.

Directly to the left of the Little Ship inn was another pub, the Old Arm Chair. In 1875, there were five public houses, three wine and spirit merchants and one brewery operating in Redcliff Street. A sixth pub, the Don Cossack, on the corner of Redcliff Street and Portwall Lane, was temporarily closed - see Mb6022. Two years later, both the Little Ship and the Old Arm Chair would be lost to road widening. In 1897, the Daniel Sykes & Co brewery would eventually be merged with Bristol United Breweries Ltd, and promptly closed down the following year. In 2020, the only evidence of any public house existing from 1875 can be found in the name of Golden Lion Court, a residential and supermarket development at 100-101 Redcliff Street. This stands on the site of the Golden Lion inn, which opened in 1792 and operated until 1938 2.

Just beyond the Little Ship inn there is an alley leading to Warry's Court, once known as Baton's Court, and four other businesses (all obscured in this photograph). The fine four storey building seen beyond the dray cart is 41-43 Redcliff Street, the premises of Sanders and Ludlow, confectionary manufacturer and wholesalers. 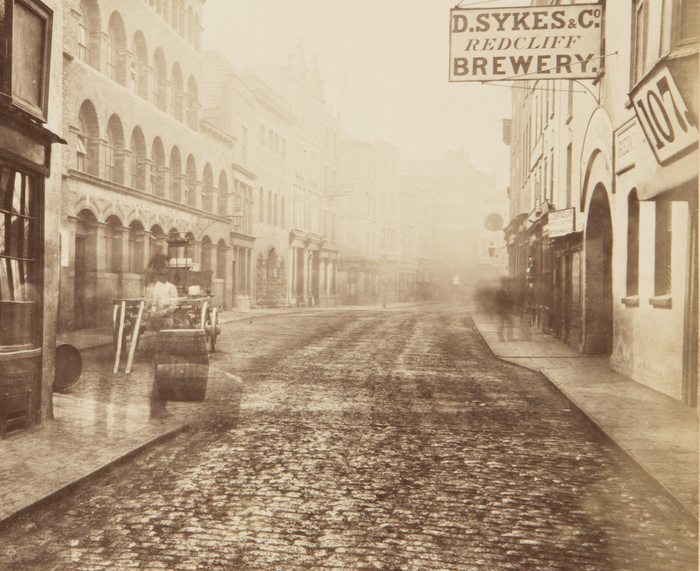 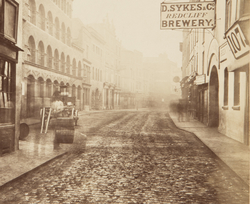 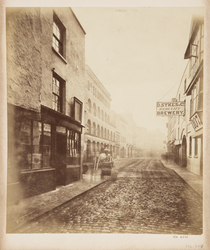 : a sepia colour photograph, showing: a view of Bristol, taken from near 107 Redcliff Street