The photographer is standing near to 83 Redcliff Street, the premises of Bees & Fear, wine and spirit merchants. The building opposite, on the corner of Redcliff Street and Portwall Lane, is the Don Cossack public house. Recorded on the curved sign above the entrance is the name G. C. PLUMLEY. When this photograph was taken, the Don Cossack was closed. Note the posters either side of the door which state: Removed / to the / White Hart / Thomas Street. These had been put there by the recent licensee George Clark Plumley (1815-1877) to redirect customers to his new place of work at 95 Thomas Street. In 1876, the contents of the Don Cossack including all furniture, bar and cellar fixtures were sold by auction, the reason given as Mr Plumley's departure to another premises. The Don Cossack would reopen as a pub in 1877, but over the following five years the licence would change often, suggesting it was failing to attract custom, and in 1890 it became a restaurant, and later a temperance hotel.

The unusual name - Don Cossack - was adopted by a number of English pubs during the Napoleonic wars when Russian cavalrymen forced Napolean to retreat from Moscow in 1812. However, when the Crimean war began in 1853, British soldiers found themselves fighting against the Cossacks and many of these pubs were re-named, but not this one in Redcliff Street.

Other businesses visible in this photograph include: No 77, George Davidge, hairdresser and cutler; no 80, Alfred Isaac Davis, draper and milliner And at 204 Hotwell Road as the shop sign states (note the stepladder and garments pegged up outside the shop on the corner of Freshford Lane); and at no 81, Simeon Billett (1839-1917), tailor and outfitter, or as the shop signs states: The People's Tailor. According to Billett's advertising in the Bristol Mercury newspaper, he was: the largest tailoring and outfitting establishment in the West of England. He would however become bankrupt in 1895 and live out his final years in the Lady Haberfeld's Alms House, Hotwell Road.

A man resting his hand on a three-wheel pushchair and a boy stand on the pavement near to the Don Cossack pub and look directly at the camera, both staying still just about long enough to be captured. Elsewhere there are fleeting images of figures, including what looks to be a female entering the photograph in the lower-left corner.

At the very end of Redcliff Street, the looming outline and spire of St Mary Redcliffe church can just be seen. In 1875, this would still have been a novel view for the locals. The original spire had been struck by lightning in 1446 and it took until 1872 to replace it. 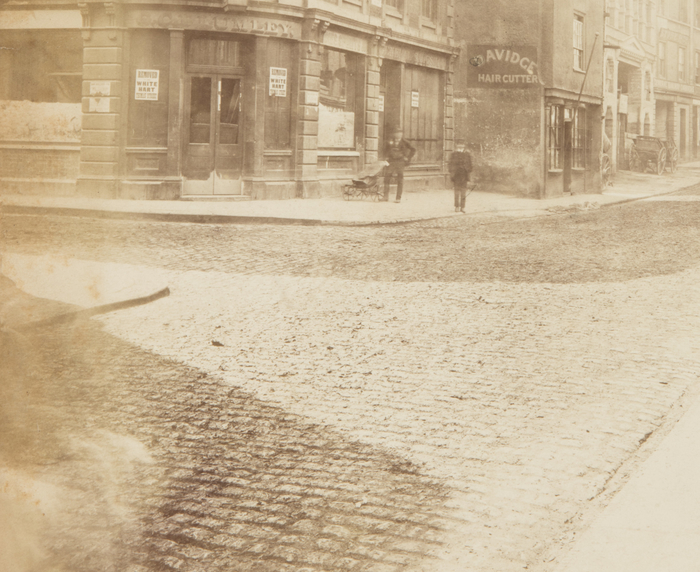 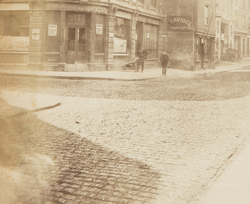 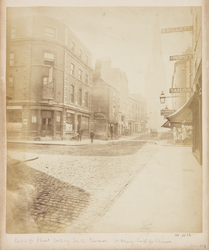 : a sepia colour photograph, showing: a view of Bristol, taken from near 83 Redcliff Street