The photographer is standing near to 143 Redcliff Street, the premises of Thomas Fogaty, wharfinger for nearby Penner Wharf, and also a ship builder. The large sign on the wall states: GODWIN-WARREN & CO. / IRON / MERCHANTS.

Godwin, Warren & Co were located at 140 Redcliff Street. The business, founded by William Warren in the 1790s, was a wholesale ironmonger based originally in Bridge Street, Bristol. By the time of this photograph, William's son Robert had taken over, commenced a partnership with James Godwin, and the business was manufacturing fasteners, fixings and steel.

In the distance, Neat & Co, 17 Redcliff Street, can be seen - see Mb6019 - and to its left is 16 Redcliff Street, outside of which stands a bowler-hatted young man with his hands in his pockets. The street numbers deviate here due to newer, larger buildings having been constructed over a number of earlier smaller premises. The two fine-looking buildings opposite Godwin, Warren and Co are the offices and warehouses of Henry Prichard & Co, oil merchants at 7-9 Redcliff Street. However, a close examination of the arches to the left reveals a window display of cocoa products, suggesting that part of the premises were shared or sub-let. To the extreme left is part of the industrial building of Finch & Godwin, wire weavers at 5-6 Redcliff Street - see also Mb6020.

Standing next to Godwin, Warren & Co's wall, to the left of a small group of ghostly men and children, are some bearded policemen wearing uniforms and helmets. At first there appears to be three, but on closer examination the slightly taller officer on the left has duplicated himself by stepping to one side during the exposing of the glass plate negative. Three years before this picture was taken, there were 357 policemen employed in Bristol, which had a population of 185,367, a ratio of 1 to every 519 inhabitants - a ratio which hadn't changed significantly since the formation of the new Bristol Constabulary in June 1836 1. (In 2018, figures for the Avon & Somerset Constabulary were 2,597 officers for a population of 1,695,000 - a ratio of 1 to every 653 inhabitants.) There were four main police stations in Victorian Bristol: the City Station at Bridewell Street; Clifton Station at Brandon Hill; Bedminster Station at Bedminster Parade; and St Philip's Station at Clarence Road. The officers shown here were from Bedminster. In 1872 working hours had been reduced from ten to eight, plus fifteen minutes before and after shifts for writing up reports. The work was arduous. Consequently, there was a large turnover of men, many being dismissed for drunkenness. Officers were expected to patrol their beat at the rate of two and a half miles per hour, walk twenty miles per day, and there were no breaks for tea or meals. In general they would take the same route each day. This meant that anyone on their beat needing assistance or with anything to report would know when to expect them. Policemen were also under strict orders not to indulge in idle chatter or loiter, a rule the two policemen are clearly breaking here.

1 All information regarding Victorian policing is taken from: The Police in Late Victorian Bristol, Brian Howell, local history pamphlet 71, the Bristol Branch of the Historical Association, published 1989. 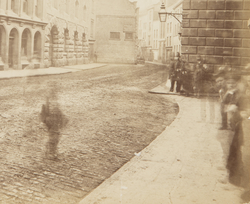 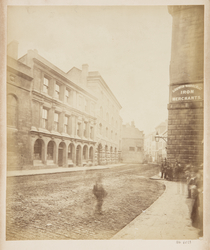 : a sepia colour photograph, showing: a view of Bristol, taken from near 143 Redcliff Street