Leigh Woods, on the Somerset side of the River Avon, was discovered by the Bristol School of Artists in the early-1820s. They crossed the River Avon by ferry to sketch, and also to picnic, converse and play music. One of the Bristol School artists, the Reverend John Eagles, later called it his "land of poetry and enchantment". A Sketching Party in Leigh Woods is certainly enchanting. It shows an artist sitting on a tree stump, his eyes firmly fixed on a view while he sketches left-handedly. There is a younger man lying on the ground reading, with a palette and brushes nearby and an open artist's box containing a landscape sketch inside the lid.

The identities of the figures shown are open to question. The work was originally believed to show William Muller and his family, which would make the younger man his brother, Edmund Gustavus Muller, who was also an artist. However, the younger female figures cannot be related to Muller as he did not marry, and Muller's only sister died in childbirth. One of the female figures might possibly be his fiancee, a Miss Philpott, to whom he was engaged for eleven years. Perhaps it shows the artist of the work, Samuel Jackson. The woman in the bonnet might be his wife, Jane Jackson (nee Phillips), but the reclining young man cannot be their son, Samuel Phillips Jackson, also an artist and later a keen photographer, who would have been less than a year old when this picture was made. Samuel Jackson was also right-handed, as is seen clearly in portraits and photographs of the artist at work. 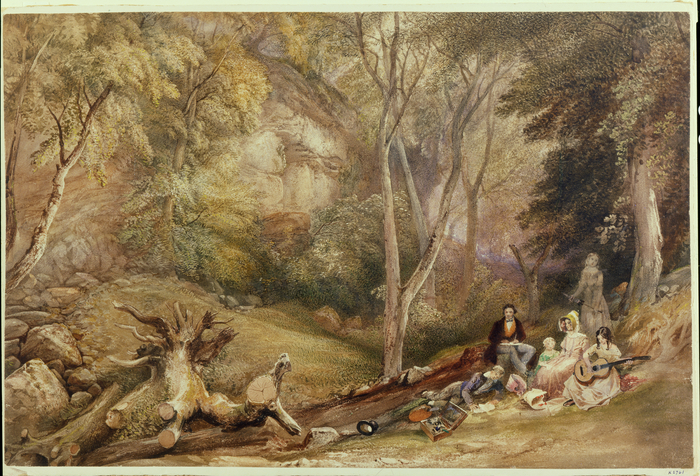 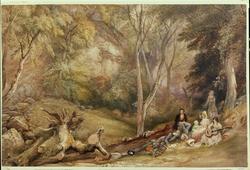 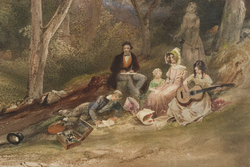 : A Sketching Party in Leigh Woods

: a framed colour drawing on paper, showing: a view of Leigh Woods, on the Somerset side of the Avon Gorge, with a group of figures including an artist sketching, a young man lying on the ground, and three women and a child; one of the women is playing a guitar