Mb4893/3: David Hockney, The Start of the Spending Spree and the Door Opening for a Blonde

David Hockney spent two years completing A Rake's Progress (1961-1963). Inspired by Hogarth's original series of paintings and prints from 1733, which tells a cautionary tale of inherited money and its potential misuse, Hockney produced 16 original etchings for the series. Moving the location from England to New York, A Rake's Progress is a semi-autobiographical tale of a young gay man's experience in America, touching on themes of lost identity and sex in a new city. Editions Alecto published and sold the 16 etchings as an edition of 50 and paid Hockney 5000 pounds for the series, an astonishing amount to the young artist. Hockney described later in his career how he was embarrassed at the price his etchings sold for in 1963 but that their sale allowed him to move to California where he produced some of his most iconic works including his 1967 A Bigger Splash. 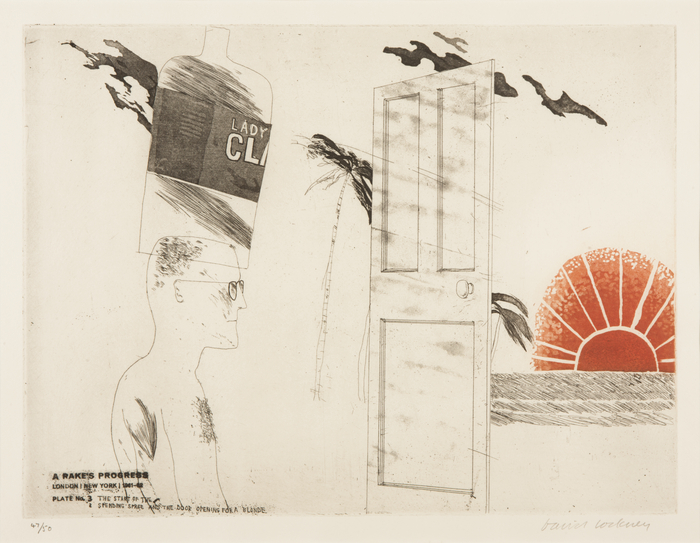 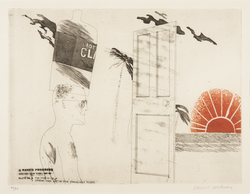 : The Start of the Spending Spree and the Door Opening for a Blond

: a framed etching and aquatint on paper, showing a plate from David Hockney's version of 'A Rake's Progress' which the artist based on William Hogarth's series (first published, 1735) and also on the artist's experiences during his first visit to New York in the summer of 1961; plate 3, whilst in the USA, Hockney chose to dye his hair blonde with a bottle of 'Lady Clairol' hair dye, whose slogan at the time was "Doors open for a blonde"; the door in this work opens onto a sunrise

Mb4893/3: David Hockney, The Start of the Spending Spree and the Door Opening for a Blonde