The artist Eugene Bejot (1867-1931) is captured in a snapshot, sitting on a portable stool and sketching the buildings on the opposite side of a river. His materials are scattered on the ground by his feet. Behind him there is another stool and a portable easel with a partly completed drawing, suggesting he is sketching with another artist, who is possibly taking the photograph. Research has yet to confirm the exact location shown, but the river is almost certainly the Seine probably in one of the outlying districts of Paris. The date is between 1910 and 1920.

This small photograph was given to Bristol with a number of Bejot's works as part of the Millicent Wedmore bequest in 1965, and came with another photograph showing Bejot showing a piece of work to a patron in his studio (Mb6099). Bejot's prints and drawings were collected by the father of Millicent Wedmore, Sir Frederick Wedmore, a Bristol-born art critic and writer who championed French artists and printmakers. He knew Bejot well enough to call him a friend, and the sentiment was reciprocated - a number of Bejot's drawings in the bequest are inscribed in French to Fred Wedmore with affection. 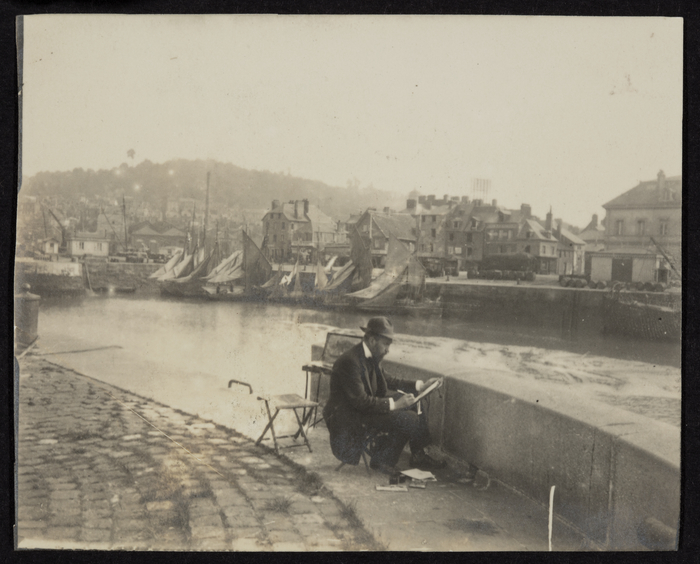 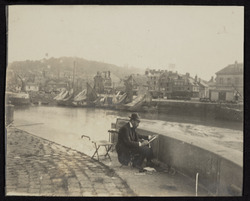 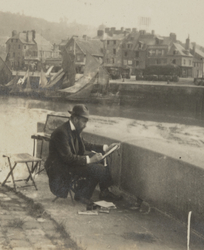 : a black and white photograph, showing: the artist Eugene Bejot sketching beside a French river; there is a second portable chair and easel set up to his left, suggesting he is sketching with another artist (who is possibly taking the photograph)