A selection of tickets that Jonathon has collected since 1980 for concerts at local Bristol venues such as the Thekla, the Bierkeller and the Colston Hall. The anticipation before going to a gig was part of the excitement. Obtaining tickets would be an adventure in itself - often the best method was to post a letter to the venue with a stamped-addressed envelope attached. Before the actual gig, Jonathon and his friends would learn the lyrics to songs and read reviews of previous shows. 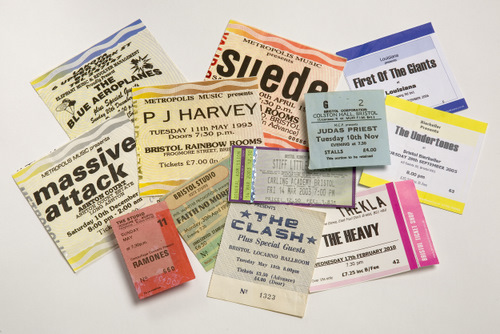 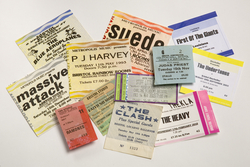 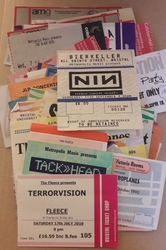 : Group of tickets for concerts and gigs by various bands, at venues around Bristol, dating from c1980 - 2010. There are 138 tickets, all from local Bristol venues such as the Thekla, the Bierkeller and the Colston Hall. They date from around 1980 to the present and include lots of really well known names such as Marillion, James, Nine Inch Nails, Terrorvision, and Massive Attack, and very-nearly-made-it local bands like the Blue Aeroplanes, and a whole host of others. The smallest are stubbs and are around 55mm x 60mm. Larger ones are around 145mm x 100mm.