This black and white photograph was taken in the spring of 1951 by an unknown photographer working for the Western Daily Press and Bristol Observer. It shows the artist Herbert Truman (1883-1957) apparently putting the finishing touches to his painting Crypt of St Nicholas' Church, Bristol (K4003). At first glance, it looks like a useful record of an artist at work, and in some ways it is. However, the painting on the easel is clearly not the view from where the artist is sitting (he should be further to the left) and the open box containing his materials and tools is slightly out of reach for a right-handed artist. The work on the easel also appears finished, probably meaning the palette and brush the artist is holding are really only there for the benefit of the photograph. This is, of course, a completely staged picture, set up by a newspaper photographer interested in contriving an image to accompany a story.

This photograph was given to Bristol Museum at the same time as the painting Herbert Truman is apparently shown working on. Bristol also has on long-term loan the painting seen in the centre of the altarpiece on the far wall, The Entombment, by an unknown artist (K4598). The photograph is therefore useful for another reason. It is one of the only records of the complete altarpiece. 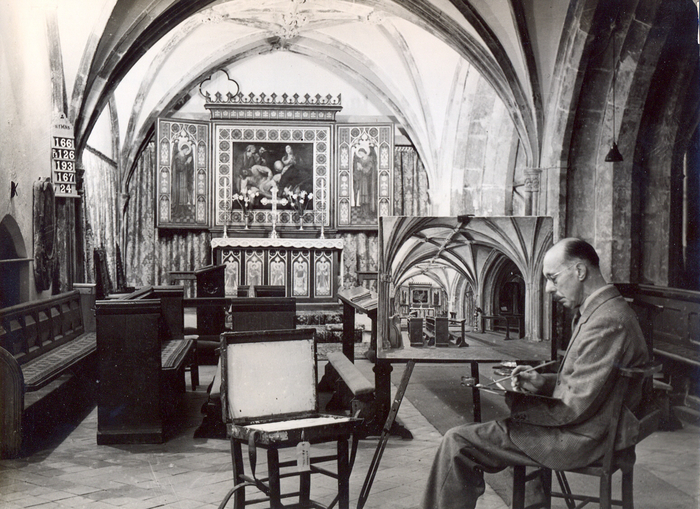 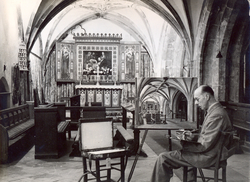 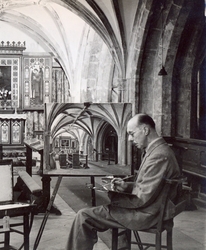 : Herbert Truman Painting in the Crypt of St Nicholas' Church

: a black and white photograph, originally produced for a newspaper, showing: the artist Herbert Truman painting in the C16th crypt of St Nicholas church; the painting the artist is working on is almost complete (see K4003), and on the far wall is an altarpiece containing a painting of the entombment of Jesus by an unknown British artist (see K4598)