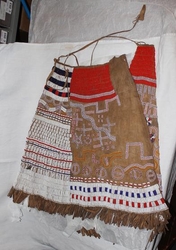 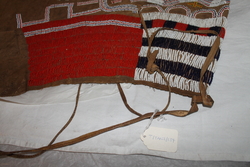 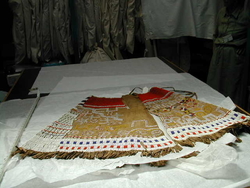 : Woman's skirt made of four hide panels; beaded with thousands of beads in bands and symbolic designs. Heavily beaded with white, red, black and blue, yellow glass beads using lazy stitch, 3 bells and fringed hem. Stitching is thread made from sinew. Hide tie. The skirt was worn with the heavily beaded central panel at the back and the the two side panels overlapping at the front, right over left. The beadwork on the left leaves a bare section for the overlap. Colours of beads suggest this may be early beadwork, but an early 20th century date is speculative. At the age of about 14, young Iraqw women entered a period of seclusion for 6 to 12 months, as their initiation into womanhood: the initiation rituals, Marmo, were in theory banned in 1930 by the colonial government, although elements continue to the present day. During their seclusion, young women were looked after and taught by older women. They were circumcised, taught about sex and women's issues, and fed rich, fattening foods. During seclusion, they decorated the hide cape they wore on entering seclusion into a beaded skirt. The colours and patterns may have a symbolic meaning within Marmo but it is unknown to outsiders. They emerged wearing their heavy beaded skirt as purified women,