The firm of Colthurst and Harding was one the largest paint manufacturers based in Bristol during the late 19th century. In the early days paint and varnish manufactory was not without its dangers and many fires and explosions happened at such factories over the years. In addition to manufacturing paint and varnish at their Temple Gate factory Colthurst and Harding also imported petroleum for supply to retailers. One particularly large shipment of petroleum spirit to London was to cause their worst and most devastating accident at Bristol Docks, setting it on fire and resulting in a probing and far reaching investigation.

The ‘Safe Storage of Petroleum Act’ was passed in 1877 requiring firms to store certain inflammables outside the city limits so Colthurst & Harding invested in an isolated and secure site on the Bath Road at Arnos Vale for that purpose. Here they built an underground store and developed the Phoenix Wharf on the River Avon (The Cut). The site eventually became the main factory and offices in operation until 1964. Today the old factory has been developed into small units for creative industries and is now known as ‘Paintworks’

On the 16th November 1888 Colthurst and Harding’s foreman notified the Bristol Dock Water Baliff (Captain S BAKER) that they had chartered the ketch ‘United’ to convey ‘naphtha’ to London and asked for a loading berth to be assigned at ‘Welsh Back’. Capt. Baker gave the necessary authority for the vessel to be berthed near the Weighbridge almost opposite Messrs. Waite and James’ warehouse at the end of King St.

12,400 gallons of petroleum spirit were to be conveyed from the firm’s petroleum store to Welsh Back by horse and cart, which meant 31 cartloads, each containing ten 40 gallon wooden barrels, would travel the three miles to Bristol Docks. This was the first whole cargo of petroleum spirit the firm had supplied and the conveyance would take several days to complete. Each barrel had a label attached and the principal clerk of the firms Petrol Department (Mr. W G EMERY) thought he should pay ‘particular and personal attention to the shipment’ so attended during the whole time carts were loaded, unloaded, rolled on board and lowered into the ship’s hold.

Dock Traffic Manager (Mr MCNAB) was informed that the cargo was coming on to the quay and asked the dock police to ensure no lights or fires were lit. The first cart left Colthurst and Harding’s underground store on Saturday 17th November 1888 and by 3pm on Tuesday 20th November loading was complete.

The ‘United’, registered in Jersey, was a ketch of 58 tons with a crew of four, the Master HENRY CARTWRIGHT aged 32, the mate his brother Joseph, 45, both men from Jersey and ‘the boy’ ALBERT DREELAND (known as Toby) aged just 17. The fourth crew member was Frenchman, EDWARD MENIER, who was also known as JOSEPH BASLE. The Master of the ‘United’ was warned about lights and fires and told to keep the red flag hoisted while in port, in fact he was warned of the danger so many times by various officials he was heard to express the wish that he’d never engaged to take the stuff at all!

The ‘United’ lay all night on the dock and was moved to the Bathurst basin at 6am the following day, November 21st. She had been assigned a berth on the North West side of the basin in an isolated and unfrequented spot, by Dock Master Capt. D. DANDO, to await a suitable tide.

In the ordinary course of events the vessel would have set off on the next tide but the wind was boisterous and unfavourable so she lay at her assigned berth. At 11.30 a.m. that day a violent explosion occurred on board. The explosion blew up the dock, killed three of the crew, threw the fourth into the water (whence he was recovered seriously injured) and injured Police Constable WEBBER who was on watch on the quay. Burning petrol flowed about the basin setting the dock on fire and doing much damage to the Guinea Street iron swing railway bridge. The wall of the basin was a good deal defaced, the General Hospital, the Ostrich public house and the offices of both Messrs ROBINSON and FRY and Sons, despite being a good distance away, had many windows shattered. The petrol flowed some 30 feet beyond Guinea Street Bridge, the flames reaching an immense height, but the spirit was eventually contained by booms, avoiding further damage to nearby property. The ‘United’ burnt out, and remained a floating, blackened shell.

A thorough enquiry into the explosion was carried out for the Home Office by Colonel V. D. MAJENDIE, H.M. Chief Inspector of Explosives, whose extensive enquiries concluded that Colthurst and Harding had hired an unsuitable vessel. Col Majendie’s report stated that the hold of the ketch, despite being closed for and aft by inch thick wooden bulkheads, was not air tight. The cabin and the forecastle each contained a stove or fireplace. The cargo was a variety of naphtha, more commonly known in this country, as “benzoline”, an exceedingly light, volatile liquid which gives off inflammable vapours at ordinary temperatures, adding that there were no grounds whatever for any suggestion that the accident may have been due to some ‘deception or misapprehension as to the quality of the cargo.’ All were aware, he wrote, of the dangerous nature of the cargo but the restrictions of no lights or fires close to the vessel could hardly be adhered to once the ship was at sea! The captain, who had never carried such a cargo, or the mate were blamed for the accident, probably caused by one of them deciding to light his pipe.

The Captain, his brother and the boy Toby were buried at Arnos Vale on December 1st 1888, ‘many paying their last tributes as the three coffins were lowered into the ground’ The fourth crew member, pulled from the water by a courageous PC Webber who had himself been injured at the scene by falling debris, suffered shock and a compound fracture of the leg. He made a good recovery but doubtless, like the residents of Bristol who gathered to witness the devastation, he would never forget the day the Bristol Docks caught fire. 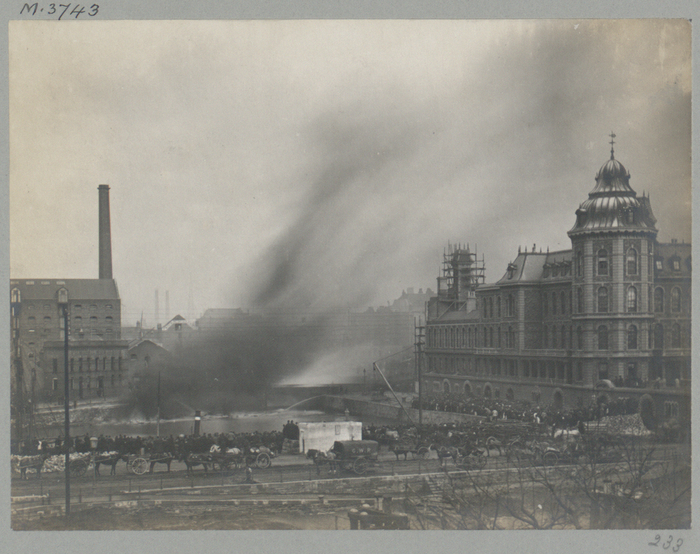