The film collections from the former British Empire and Commonwealth Museum are gradually being checked, and the catalogues revised. So far, the following catalogues have been published and can be searched online by clicking the links below. Where a film has been digitised, the entry will record that a digitised MPG version is available. These can be viewed at Bristol Archives. If there is no digitised version, the catalogue will state â€˜not yet digitised'.

Please note that a very small minority of the films in this collection contain scenes of a sensitive nature, and may cause distress. These include images of nudity, violence, deceased persons, people engaged in ritual or ceremonial activity and images taken for anthropological investigation which would not now be considered appropriate.

To search each collection, click on the link and you can then navigate through the entries, using the tree on the left-hand side of the screen.

George Thomas Basden (1873-1944) was an Anglican missionary working in Nigeria. He combined his missionary work with his interest in anthropology. This collection contains 10 reels of film taken mainly in Nigeria focusing on the Ibo people during the 1920s and 1930s.

Wilfred Theodore Blake was a pioneer aviator and traveller. These 6 films reflect periods of his life in Gibraltar and Spain in the 1930s and 1960s, and also include a promotional film showing a trip from Croydon to Paris on an Imperial Airways flight in the early days of domestic air travel (circa 1928).

Sir Jack Boles (1925-2003) served as a district commissioner in North Borneo after WW2. These films date from 1960-1961 and show scenes from family and local life, as well as SEATO military manoeuvres.

Arthur Bloodgood Briars was a civil servant who lived with his wife Jacqueline and children in Nyasaland and Kenya during the 1950s and early 1960s. These films record the Briars' family life and travels around Kenya and neighbouring countries.

Geoffrey Brinton was a Company Director based in Southern Rhodesia, and a keen amateur film-maker. These 20 films reflect his family's experiences travelling around East and South Africa.

David Buchanan was in the Northern Rhodesia Police from 1956 to 1966. This collection includes a film of a UNIP rally, personal papers and printed material relating to his time with the police force.

Air Commodore Leonard de Ville Chisman served in the RAF in India during the 1930s and 1940s. The films show military operations he was involved with in Waziristan including aerial bombardments and leaflet drops to warn locals against supporting the insurgency (the collection includes copies of the leaflets written in Urdu and Pashtun).

These films were taken by John Cleave who worked for the colonial service in Uganda during the late 1950s and early 1960s. He recorded wildlife, people of the Karamoja District, and events on independence day in Uganda, 1962.

Eric Geoghegan worked for British American Tobacco during the 1920s, and was based in Burma. He shot several films during his time there, showing various aspects of life in Burma.

Herbert Bartholomew Gifford lived in India from the 1930s until Indian Independence, serving in the army during WW2. This collection includes films and photographs recording his time there.

Ivan Haslam was an Indian who worked in the Gulf, then East Africa for the Indian High Commissioner before moving to the UK in 1956. There are 3 photograph albums and 12 films recording his time in these countries during the 1940s-1960s. Of particular interest are the films showing his domestic life as part of the Indian community in East Africa in the early 1950s.

Sir Donald Hawley was a diplomat who served in various countries including the Trucial States (United Arab Emirates), Oman, Iraq and Malaysia from the late 1950s to 1981. These films capture his official duties and also show the domestic side to life as part of the colonial political service.

Michael Higgins served in the Palestine Police in the 1920s. This short bit of film relates to the Nebi Musa riots in April 1920, which took place in Jerusalem and lasted several days.

Peter Hinchcliffe was British Political Officer in Aden in the 1960s and was involved in the Radfan Campaign. This collection contains photographs, slides and one videotape recording his time there.

This collection mainly consists of photograph albums and films showing family and local life, compiled by the Jeans family from their time living in North Borneo (now Sabah) from 1949 to 1963.

This collection consists of films from 1930s, taken by Colonel John Hamilton Bernard Peyton when he was serving with the army in India, and photographs from Walter and May Dalrymple (Peyton's daughter) mainly dating from 1930s-1940s. Walter Dalrymple was the manager of the Vishnu and Lakshmi Cotton Mill at Sholapur, India.

Theresa Knowles worked as a music and art teacher in South Africa and Southern Rhodesia in the 1950s. This collection consists of her 12 films, 3 diaries and also some of her paintings, created and compiled during her travels around the area with her friends.

Manfred (Freddy) Kosten was a mining geologist who worked on the Akosombo Dam (Ghana) and the Kainji Dam (Nigeria) in the early 1960s, and these 12 films record his time there.

O J Lawton taught at Goromonzi Secondary School in Southern Rhodesia during the 1950s-1960s, and at some point made a film showing the education of black children at several schools in the area.

Austen Havelock Layard served in the Indian Civil Service during the 1930s and 1940s. These films reflect his domestic family life, official events in India and tourist trips.

Allen Leeds was an Agricultural Officer based in the Gold Coast and mainly dealt with the cocoa industry. His films reflect family, social and work life during the 1950s.

Alan Roy Leonard lived with his family for several years in Calcutta, India, and then in Africa during the 1950s. His films generally show family and local scenes as they travelled in India, Burma, Ceylon and various countries in Africa.

The 10 films in this collection were taken by Alistair Macdonald, a surveyor who worked for the colonial service in various countries in East Africa, and the Bahamas during the 1950s and 1960s.

James N Macpherson OBE was a colonial worker based in the Gambia during the 1950s. He made several films during his time there, showing his journeys by river and his attendance at local events, including the visit of the Duke of Edinburgh in 1957. 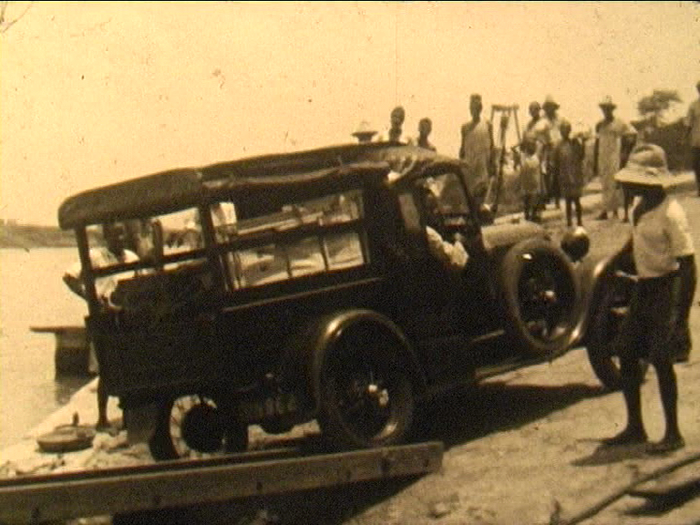