This watercolour from the Braikenridge Collection shows Bristol's elegant Queen Square from its northwest corner with people enjoying the green at its centre - children are playing while adults are chatting. The truncated tower of the famous St. Mary Redcliffe Church, is seen in the background on the left. The artist has also taken care to show the young lime trees which were planted in 1825.

Queen Square had been completed in the 1720s and was named after Queen Anne who had visited Bristol in 1702. It is one of the largest 18th century squares in England, reflecting the wealth and ambition of the Bristol merchants who built it. Michael Rysbrack's bronze statue of William III, Anne's predecessor and brother-in-law, was erected in the centre in 1736. It is now generally acknowledged as the finest equestrian statue in the United Kingdom.

This image celebrates the intended function of the square as a sophisticated urban space to rival London - G.W. Braikenridge, one of the Bristol school's main patrons, himself lived here until about 1817, in the house above one of the two boys rolling hoops. Originally situated conveniently close to the wharves for residents to oversee their trading businesses, this proximity eventually led to the square's fashionable status being eclipsed as the gentrifying bourgeoisie migrated up the hill to the neighbourhood of Clifton, away from the dirt, noise and especially the stench of the (since 1809) non-tidal harbour.

Rowbotham's image presents a stark contrast to the scenes of violent destruction captured by William James Muller when the Bristol Riots took their toll on the square only three years later. 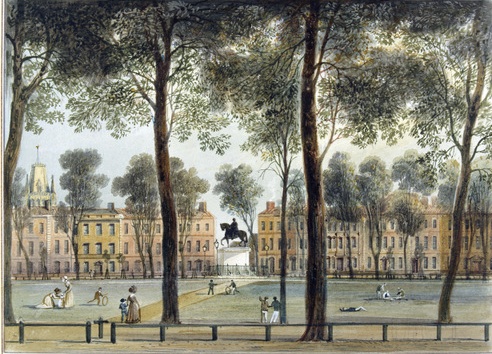