Lanie Rose, on her 'As a Black Person in the UK' artwork on Jamaica Street:

'This piece was painted from June 4th - June 6th 2020, just before the Bristol protest that heroically took down the statue of Colston. One of many protests I am very proud to have attended.'

Museum curator: 'What inspired you to do this piece?'

Lanie Rose: 'I was frustrated by a common misconception that the extreme level of racism embedded in society is an American problem. Many people, although ‘well meaning’, show up to marches in support of one person or one country, not realizing that anti-black racism is built into many cultures and the UK is far from innocent.

I was invited by my friends to help paint a mural in support of black lives that they wanted to contribute as white allies. They planned to paint the next morning on the PRSC wall on Jamaica street. However, after being invited I felt very strongly that I wanted to create something that would highlight the racism here in the UK and take a different approach. I stayed up that night buzzing with ideas to create my own piece. My friends were happy for me to take the lead and use the space instead for my own creation. Together we painted the mural with my message, which gave me the opportunity to share my thoughts and feelings with the world. It was also very therapeutic as it allowed me to release some of the anger and pain I was feeling in a creative outlet. I shared a mixture of my own experiences and statistics to give just a small glimpse into the deep systematic problems here in the UK.

The project ‘As a black person in the UK’ started almost by accident, I never expected the first piece to resonate so much with so many people. It's been shared thousands of times on Facebook, Instagram, Twitter and Tumblr. A friend offered to work with me to set up ‘As a black person in the UK’ so there was a space to share future projects and work. The hope was to eventually stop sharing my own voice and start supporting other black voices. This is still something I would like to do in the future, but I have had to take some time off at the moment. Just to give myself a moment away from the pain that comes with having to fight for equality in a world that is still filled with so much hate, ignorance, and racism.'

Museum curator: 'I’m not sure how that wall works but I love how often it changes & how relevant it always is- was yours a People's Republic of Stokes Croft commission? How do they decide what goes up?'

Lanie Rose: 'The piece was not commissioned by PRSC, they let artists use the space to paint whatever they want. They were also extremely supportive and supplied us with the paint and equipment needed to create this piece. They continued to lend equipment and support for the next two projects. Along with support from the Gofund me page we set up to raise money for paint and supplies for the next two pieces.'

Museum curator: 'Did you do the huge piece by the motorway too?/ How long was your work there?'

Lanie Rose: 'The second mural created was the 90metre rainbow wall next to the M32 to be viewed by anyone driving in and out of Bristol. I wanted to keep this one simple and encourage people to keep the momentum going, as less people were attending protests and the world was moving on. Just asking people to do more and not let it just be a moment. To educate themselves, listen, learn, and continue supporting black lives, communities, and businesses. For this wall we wanted to make very clear that ALL black lives matter - trans, queer and disabled. We borrowed the rainbow colours from the LGBTQ+ community.

The third mural I created was placed back in central Bristol, on Turbo Island, Stokes Croft. I designed this piece a few days beforehand and wanted to get it up around Bristol right away. I wanted to create something that would empower all the beautiful black queens and kings that saw it. I wanted it to be an interactive piece that people could stand in front of, become part of the art and tell the world that to be black is strength and beauty.

Museum curator: 'What was the response as you were painting?'

Lanie Rose: 'I had mixed responses to the art piece on Stokes Croft.

There was overwhelming support and positive responses received both in person and online. However, while painting the mural on stokes croft we had people come by shouting, ‘all lives matter’ and ‘I’m not a racist but...’ before making a racist comment. Once posted online I had many ignorant and racist private messages sent to me for the first few months.

Racist commenters would regularly try to bait us into arguments, ironically confirming the racism in the UK. There was also regular ignorance online, one white person stated that the statistic on our taxes paying reputation to slave owners, was “phrased in a provocative way”. My work does not pander to fragile minds, society can’t progress in a world where everything is made palatable for white people.

The second piece by the M32 was defaced by racists twice in the first week of it being up and many times more over the next 6 months. The 3rd piece on turbo island was defaced the same day it was completed. Which is yet more proof that this work is important and needed. Luckily, we have an amazing group of volunteers who are up for helping paint over the hate each time it presents itself.' 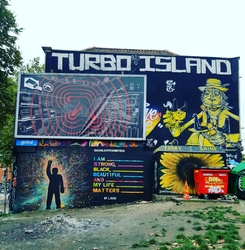