John Young's Great House was the grandest building in Tudor Bristol and proved fit for a queen. It was built where the Carmelite Friary had been and where the Colston Hall now stands.

In the mid 1500s, Young, came to settle in Bristol where some of his ancestors had made their mark. He took up residence in the old Carmelite Friary (built in about 1256) and which overlooked the River Frome. Young determined to build an imposing mansion on the site and in 1568 he purchased the old building from the Corporation and

'proceeded so vigorously with the erection of his Great House, that it served in 1574, for the fitting reception of Queen Elizabeth and her numerous suite during her week's sojourn'.

John Latimer, Sixteenth-Century Bristol. In return for his hospitality, John received a knighthood and in 1578 acquired the remaining part of the estate from the Corporation as well as Rowland's Lodge and garden on Stony Hill. He was subsequently responsible for building the Red Lodge there, which is now the only part of his property that remains.

The house itself was a large two-storey mansion with gables and a courtyard enclosed by two wings. After the house was completed Young created walled gardens that extended up the hillside.

The house had ceased to be a domestic dwelling by the mid-1600s and became a sugarhouse in 1653. In 1707 Edward Colston acquired it and established the Colston Boys' school there. 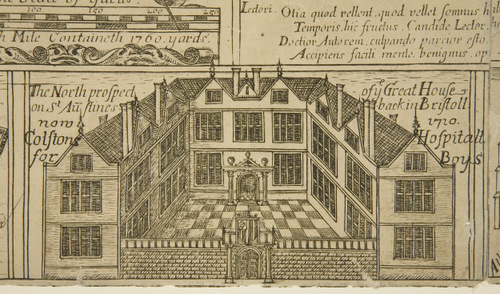 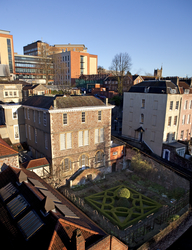