This meticulous depiction of two glamorous women lounging in an ancient Roman villa exemplifies the work of Lawrence Alma-Tadema, who became interested in daily life in ancient Greece and Rome after visiting Pompeii in 1893. From the marble-clad landing in the foreground the eye is drawn along a vaulted ceiling towards a view of the Mediterranean coast beyond. The intense colours, including the dark pink blossoms of the potted hibiscus, and the smooth build-up of the picture's surface, give a sense of heightened realism.

Traditionally the young women have been interpreted as rivals in love awaiting the attentions of the same man. A large marble statue to the left shows Cupid, the god of love, taking off the mask of a Silenus, companion to the god of wine Bacchus, which suggests that the women's love rivalry is about to be unmasked. The artist based the sculpture on artefacts found in Roman museums, photographs of which he owned.

Alma-Tadema was Dutch-born but settled permanently in London in 1870, becoming a highly successful Victorian artist. 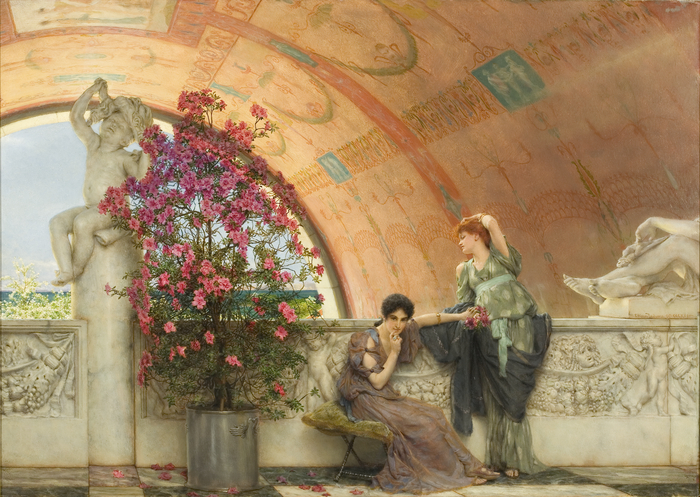