The first commercial production of zinc in Europe was pioneered by William Champion during the 1730s on the outskirts of Bristol. Before this, zinc had to be imported at great expense from India or China. Zinc and copper are the two major components of brass. As a direct result of Champion's work, Bristol became Europe's biggest brass producer.

William Champion came from a prominent Quaker family that already had a foothold in the Bristol metal trade. His father Nehemiah was a leading partner in the Bristol Brass Wire Company, based at Baptists Mills, a brass works which he had helped to establish in 1702. William's familiarity with the works and the skills of the labour force gave him a solid grounding in metallurgy from an early age.

By his own account, William toured Europe as a young man, where he acquired an interest in producing zinc. Zinc, or spelter, as it was then called, was only just becoming accepted as a metal rather than a stone or earth that appeared to convert copper to brass. To this day, it remains a mystery as to how exactly he acquired the knowledge to extract zinc from its ore, but nonetheless, when he returned home in 1730, he joined the Brass Wire Company and set to work on an industrial process that would do just that.

At â€˜great expense, study and applicationâ€™ William experimented with smelting a zinc-rich ore, called calamine, which was mined in the Mendip hills. The process that he developed was remarkably similar to one that had been in use for hundreds of years at the Zawar mines in India. During his research, he discovered that zinc could be extracted from zinc oxide (found in the calamine) by heating it to very high temperatures (in excess of 1000Â°C) and turning it into a gas. The problem was that as soon as the gas cooled down it reacted with air and turned back into zinc oxide. William realized that in order to prevent this reoxidation, zinc needed to be cooled in the absence of air. He achieved this by building a large-scale distillation furnace, based on the Bristol glass cones, in which sealed pots were filled with a mixture of calamine and charcoal. Once heated, the zinc vapours from the calamine descended through an airless iron tube at the bottom of the pot and through the floor of the furnace into a vessel of water, where condensed zinc collected in sufficient amounts to be gathered. William then had these remelted and formed into solid ingots - a convenient way in which to store and transport the zinc.

All in all, the distillation process took about 70 hours, in which time 400kg of zinc could be produced from six crucibles. Despite being a lengthy and inefficient process (it required vast amounts of coal to keep the furnaces burning) this was a huge metallurgical advance for the time.

In 1738, William Champion registered a patent for his process, entitled, â€˜A Method of Invention for the Reducing of Sulphurous British Mineralls into a Body of Metallick Sulphurâ€™ (a deliberately obscure description, which can be translated as â€˜processing calamine to produce metallic zincâ€™). The patent gave him 14-year monopoly rights and the process was operated in secret until 1766.

Once patent rights had been acquired, William invested Â£7000 in plant production and erected buildings to cater for the country's total demand for zinc. These appear to have been situated at Baberâ€™s Tower, just off Old Market, in Back Lane, known today as Jacob Street.

By 1742, he had made 200 tons of zinc at these works when he was required to relocate following complaints by the city fathers about the harmful 'smoke' from his furnaces.

This setback was compounded by a bitter price war with his competitors.The industrial-scale production of zinc threatened the livelihoods of the Bristol importers. Fearing a loss of trade, they imported cheaper spelter and brought their prices right down to Â£48 per ton (prior to Championâ€™s invention it had sold at Â£260 per ton) in order to squeeze Champion out of the market. Despite the fact that the importers were themselves losing money at this price, they maintained the lower prices, since it made it impossible for Champion to sell his stock at a profit. He was reported to have lost Â£4000 as a result (the equivalent today of Â£750,000).

In the face of these difficulties, William Champion persevered with his relocation plans and in 1743 construction began for his new works at Warmley, five miles east of Bristol.

The Warmley site was set up for the production of 'copper and brass, spelter and various utensils of copper and brass' - largely pots, pans, pins, vats and wire.

Traditional legend has it that the original Baber Tower was dismantled and rebuilt at Warmley, where locals referred to it as the 'Babel Tower' on account of the multitude of foreign voices that could be heard there - the Champions - both William and his brother John (often confused with William) - were believed to have persuaded Dutch workers to work for them following their travels on the Continent.

More reliably, the Swedish metallurgist Reinhold Angerstein noted in 1754 that the Warmley works consisted of:

'15 copper furnaces, 12 brass furnaces; 4 spelter or zinc furnaces; a bater [battery] mill, or small mill for kettles; rolling mills for making plates; rolling and cutting mills for wire; and a wire mill both of thick and fine drawn kinds.â€™

This made it the largest works of its kind in the country.

The water-wheels that powered the mills were kept in operation by recycling water derived from a 13-acre lake on the northwest side of the complex. The lake served an ornamental as well as functional purpose, with a 25-feet-tall statue of Neptune at its centre. The water was recycled by means of a large Newcomen pumping engine - the first time that a Newcomen had been used for manufacturing processes.

This new development in the metal industry - of integrated production of copper, brass and zinc on one site - was new and innovative, representing a shift away from the established practice of manufacturing these separate metals on separate sites.

A curious incident in William Champion's life, and one that has never been fully explained was his dismissal from the Bristol Brass Wire Company in 1746. Whatever the reasons behind it, relations between William and the company remained sour for the rest of his life. After his dismissal, William struck a partnership with fellow Quakers, including Thomas Goldney III (the Bristol merchant who was a partner in the Coalbrookdale Iron Works) and Sampson Lloyd (a Birmingham ironmonger) and formed William Champion & Co.

By 1748, the Warmley site was in full production. Around this time, the company's workforce consisted of about 800 men, many of whom were offered accommodation in purpose-built housing. In addition to these properties, William built his own Dutch-style house close to the works, along with ornate grottos and gardens where guests could enjoy themselves in close proximity to the factory workings. The site also consisted of a windmill, complete with revolving cap and sails, which may or may not have assisted with water circulation, and one of the largest ice houses in the country.

In 1750, in order to recoup some of the losses he had incurred in setting up this new industry, William petitioned the House of Commons for an extension of his patent. He was unsuccessful following strong opposition from competitors in Lancashire. Borrowing heavily, William continued to expand his business. He also financed the construction of the first floating dock in Bristol, at Hotwells. However, it was not a financial success and the dock was taken over by the Society of Merchant Venturers.

By 1765, the Warmley Company was in considerable financial difficulty. Substantial capital investment was required to allow for large-scale expansion. This could have been achieved through the granting of a Royal Charter of Incorporation, but, once again, Championâ€™s petition was refused. When he was discovered to be attempting to remove his money from the company, he was dismissed by its directors. They were forced to sell their works in 1769 to the old Bristol Brass Company, who never used the works to their full capacity. In later centuries it was occupied by Haskins Pottery and by Dalton & Young for cosmetic manufacture.

On 22 May 1789, William Champion died at the age of 84 at Somerset Street, Bristol. He left five children, including a son, John, born 1746, who followed in his father's footsteps as a manufacturer in the Bristol brass industry. 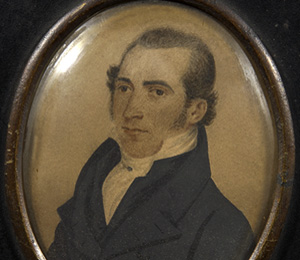 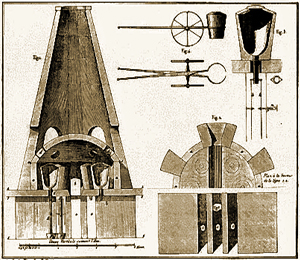 A diagram showing the interior of William Champion's zinc-smelting furnace 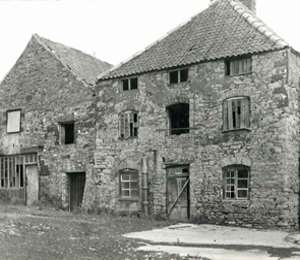 The site of William Champion's brass and zinc works, Warmley