The Repeal or the Funeral Procession of Miss Americ-Stamp 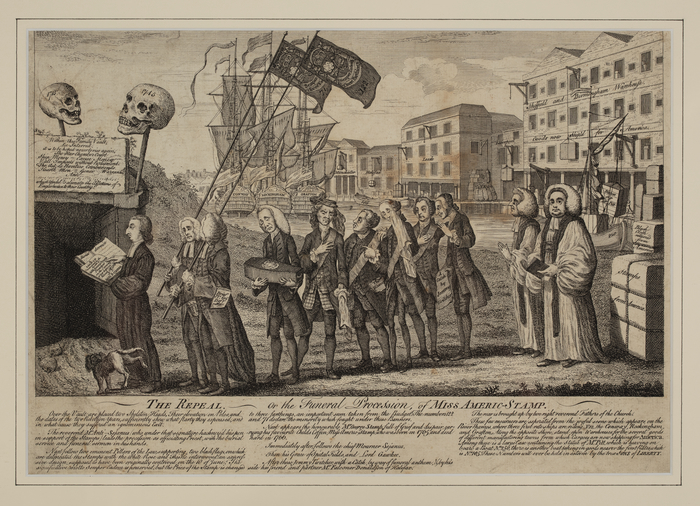 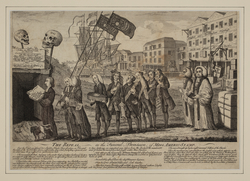 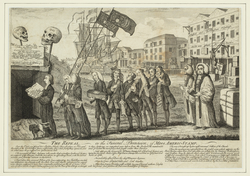 : The Repeal or the Funeral Procession of Miss Americ-Stamp

: The Repeal or the Funeral Procession of Miss Americ-Stamp Satirical print of politicians, lawyers and churchmen carrying the small coffin of Miss Americ-Stamp against a background of docks, ships and warehouses. The docks are empty except for one man loading a longboat. The mourners are the politicians who promoted the Stamp Act, William Scott, Solicitor-General Wedderburn, Attorney-General Norton, George Grenville, Lord Bute, Lord temple, Lord Halifax and Lord Sandwich, The ships are named for the Prime Minister and other ministers. The warehouses are named for British manufacturing towns, hit by the boycott of British goods in protest at the Act. Engraving 1766 Unsigned Artist: Benjamin Wilson Text below the image: The Repeal or the Funeral Procession of Miss Americ-Stamp ...The Reverend Mr Anti-Sejanus(who under that signature hackney'd his pen in support of the Stamps) leads the procession as officiating Priest, with the burial service and funeral Sermon in his hands. Next follow two excellent Pillars of the Law, supporting two black flags, on which are delineated the Stamps with the White Rose and Thistle interwoved,an expressive design, supposed to have been originally contrived on the 10 of June. The signature motto Semper Eadem is preserved, but the Price of the Stamps is changed to three farthings, an important sum taken from the Budget. The numbers 122 and 71 declare the minority which fought under the Banners. Next appears the honourable Mr George Stamp, full of Grief and despair, carrying his favourite Child's Coffin, Miss Americ-Stamp, who was born in 1765 and died hard in 1766.... These few mourners are separated from the joyful scene which appears on the River Thames, where three first rate ships are riding, Viz the Conway, Rockingham and Grafton. Along the opposite shore stand open Warehouses for the several goods of different manufacturing towns [Manchester, Halifax, Leeds, Liverpool, Sheffield, Birmingham] from which cargoes are now shipping for America...

: Repeal of the Stamp Act