On behalf of all the Chinese artists and myself I would like to say thank you to our curators (Shannon, Kate, Helen and Claire). Thank you so much for making this exhibition and symposium happen. I know it's a lot of work. In the next 30 minutes, I will introduce the development of contemporary Chinese glass (especially the university glass programmes) to you, focusing on the following six main aspects:

- how Chinese university glass programmes began;
- how kiln-casting became the dominant technique in this movement;
- the problems and opportunities we have faced during the last 15 years
- how the glassmakers shape our identity during practice by learning from history;
- the close relationship between the West and China, and the influence from the international glass community;
- my personal career as a case study

With regards to how the glass movement began in the US in the 1960's, Dr. Lynn suggested three essential conditions:

In 1992, Professor Wang Dawei was in charge of a mural project on Shanghai Underground Line One. His idea was to use glass as a dominant medium, but he couldn't find any factories which could realize his idea. Finally, he found one factory which agreed to give a try. The final result seems naÃ¯ve and less satisfying, however, it brought attention to glass as a material. In 1996 Andrew [Brewerton from the University of Wolverhampton] visited Shanghai and started a relationship between the University of Wolverhampton, Shanghai and Beijing.

He successfully introduced Western contemporary glass art to Shanghai in 1999 with the exhibition of New Glass Economy. Later on, under the patronage of Loretta Hui Shan Yan (Liu Li Gong Fang), in 2001 the Contemporary Glass Exhibition was held in Beijing and  Shanghai. That exhibition was very important to me, it changed my life. With the help of Professor Andrew [Brewerton], in 2000, two university glass studios were set up in Shanghai & Beijing. From 2004-2015, glass studios and degree programmes emerged successively in Chinese universities, firstly around Shanghai, then quickly spreading into areas around Beijing & Guangzhou. They centred on cities which are economically and culturally developed.  There are now 22 glass programmes in Chinese universities.

I have listed a family tree that shows the relationship between the University of Wolverhampton and Chinese glass, just like a seed transplanted from one place to another [see slide 6 of the slideshow presentation downloadable at the bottom of this page].

Two programmes were set up at Shanghai and Beijing, and starting from 2004, students who graduated from these two places started to set up glass programmes in other universities or cities. Also, like me, Chinese graduates from the University of Wolverhampton continued work after going back to China. I started the glass program in my university in 2007.

But what do Chinese glass university programmes look like? There are three types of programmes related to glass in Chinese higher education: BA, MA and PhD. Looking at each in detail:

Glass programmes go under these departments:

It is interesting that the glass programmes were normally placed under the category of Design / or Art & Craft.

This photo was taken in 2006 when doing my PhD research in China, it shows the young generation of the Chinese glass family [see slide 8 of the slideshow]. We were all students at that time.

It is quite delightful that 90% of us have a career that is related to glass art, either having become an educator in the universities, or furthered their study in glass. For example, Shelia Labatt in the middle was a Masters student in glass at Shanghai, and is now doing a PhD at Royal College of Arts, London.

The glass studio at Tsinghua University [see slide 9 of the presentation] has well-equipped facilities and a nice space with 16 imported kilns from Germany.

Here are the cold-processing facilities in the glass studio at Shanghai University [slide 10 of the presentation]. Kilns, flat-beds, clip-saws, sandblasted machines are the facilities that we must have in a Chinese glass studio, which is different from the UK (hotshop - kiln workshop â€“-architectural glass area - cold processing area).

What kind of glass are we using? The most popular kinds of glass are disc-shape billet and cullet. In order to make glass for kiln-working, glass billets are cast by pouring melted liquid glass into a disc-shaped steel mould (10 cm diameter with 2 cm thickness) one by one in a formula size. [see slide 11 of the presentation].

Consequently, according to the facilities and glass types we have, we now see the works [see slides 12 and 13]. We can do big casting work with a strong sculpture orientation. Most of contemporary Chinese glass focuses on kiln-forming, especially casting. But the difference is that Shanghai University focuses on open-mould casting, while Tsinghua University concentrates on lost-wax casting.

Why do Chinese artists mostly use kiln-forming? One representative artist, Wang Donghai, uses the traditional Chinese gate as symbol to express his political ideas.

Meanwhile Wang Qin has a background in making ceramic works, paying more attention to this understanding of traditional life style. He showed his interests in scholar's study objects, such as water containers, pen rests and table screens. Wang Qin is one of the representative artists of the young generation.

A recent breakthrough is that some young practitioners beginning to set up personal glass studios, showing great passion for making glass as well as a potential demand and market for glass art.

Aside from glass makers, museums and galleries in particular have also played an important role in promoting contemporary glass: SHMOG [Shanghai Museum of Glass] and twocities gallery in Shanghai. SHMOG was built in an old glass factory. It is a private museum designed using Corning Museum of Glass as a reference. Four years old, the museum has a permanent collection of historical and contemporary objects, fourteen temporary exhibitions, and daily glass blowing performances. The DIY space is a favourite area for all ages. Recently, a Kids' Museum of Glass was open to the public.

Since 2008, Chinese contemporary glass has started to be noticed by the international glass scene. We had a touring exhibition, Glass Routes, in the UK in 2008. Also in 2008 we had glass. China in Munich, Germany. Last year, Ahead of Curve showcased five glass artists.

In the near future, we look forward to an exhibition at the Tacoma Museum of Glass [Washington State], which will be the first exhibition about contemporary Chinese glass in the USA.

From the above, I believe, you will have a brief idea of how the Chinese studio glass movement began and developed in the last 15 years. From now on, I will use myself as a case study.

I was very lucky that I graduated from my undergraduate degree when Shanghai University was just starting to accept Masters students in Glass. Therefore, I gave up my original major, and chose to study for an MA in Glass.

In 2004, I came to England to start my postgraduate study at the University of Wolverhampton. It was an one year course, so, when I graduated, I felt it wasn't enough, I had only just started to know this material, there was a lot to learn. Then, I made a very important decision to further my study by doing a PhD.

My research topic was: The investigation into the development of glass as an expressive medium in China through direct contact with Western methods of making, decoration and forming. I studied glass-making in the periods of the Qing dynasty (1644-1800) and contemporary times.

I started to examine historical objects in museums, to find similarities and differences between these two periods in how they are influenced by Western glass making. The purpose was to draw insights for the future.

The PhD study opened other possible doors for my personal career. In 2007, I was invited by SIVA [Shanghai Institute of Visual Arts] to set up a glass studio and started a glass & ceramic combined course. I started to work at SIVA after I got my doctoral degree in 2010. Thus, I shifted from being a student to the position of glass educator.

Twenty glass students have graduated from this combined course. Here I have listed some of the students' work [see powerpoint presentation]. And, from 2012, I was invited by SHMOG [Shanghai Museum of Glass] to be a part-time researcher there.

I have translated two English books on glass into Chinese. One is about the history, and the other one is about the techniques of kiln-forming. I recently published a research book on Qing dynasty Chinese glass.  I  also curated an international exhibition and symposium five months ago at SHMOG. It was the first academic exhibition that put historical objects in parallel to contemporary examples.

As a glass practitioner, I have developed a body of work during the last 12 years.

The purpose of my Ink Series was to experience different techniques.I successfully combined kiln-forming with centrifugal hot-casting using the inspiration of traditional Chinese ink painting. Centrifugal hot-casting is a technique used mainly in glass factories to produce functional objects, but here I extended this technique into art-expression.

The Snow series also explored the possibilities of self-expression. It applied the method of 'Leave blank' of traditional Chinese ink painting to express the landscape of winter snow in the UK.

My PhD research made me look back to history, therefore, I made a series of work which reflected the Qing dynasty glass influence. They still keep the functional form, however, I tried to extend the boundary of art and craft.

After my daughter was born in 2010, I couldn't do my practice for two years. During that period, I thought about how to extend the application of glass art in China. As we are mainly concentrating on kiln-forming, it is very difficult for students to survive by taking glass art as a life-long career.

The "Artist in residence" project in Germany in 2012 provided a chance for me to extend my personal practice. Several years ago Prof. Andrew [Brewerton] gave me a book by Japanese novelist Junichiro Tanizaki. I was deeply moved by this book and thought about making an architectural glass that could express his idea when I was studying in the UK. But I didn't have the chance to realize it until the artist in residence project in Germany in 2012. I took the ginkgo leaves from the poem of the famous German poet Goethe as a symbol of cultural exchange, attempted to print traditional ink painting on architectural glass to express the subtlety and refinement of the traditional interior design of the East. I did a lot technical tests of how to print ink on sheet glass. This is the final result of the piece from my solo exhibition [see powerpoint slideshow slides 45-50]. Details show the interaction between different layers of glass, and the effect of light.

Now I have installed them in my own studio, one functions as a window, and another two function as screens to divide spaces.

Recently, I developed another series of  work called Gather series. The idea came from my pregnancy, to celebrate the coming of a new life. I wrote a poem when my baby daughter was born. I saved this idea for two years.

The wings represent at once the wings of angels in Western culture, but for the Chinese, it is a butterfly wing - a symbol of rebirth. I fused scientific glass tubes and got them to slump into moulds, and installed them on walls. The biggest one I have ever made was my size.

In 2013, I had my solo exhibition at SHMOG. And later on in the same year, another one at twocities gallery.

I would like to ending my presentation by quoting a sentence from Qu Yuan (Han dynasty, 206 BC - 220AD):

The way ahead is long and has no ending; yet high and low I'll search with my will unbending. 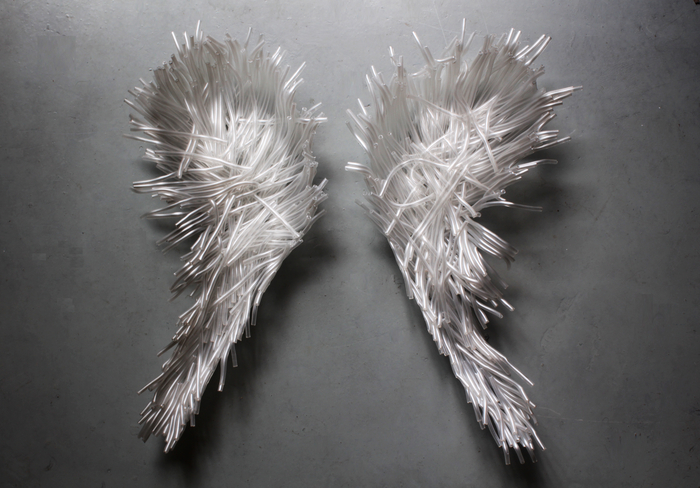