In his talk, Wan Liya (born 1963, Qingdao, China) shared the story of his development as an artist. He started by talking about his first career as a navigator on an ocean liner, and how he chose that life as a way to see the world. He had to give up his career in navigation after an accident at work, focusing on his lifelong passion: art.

Long before the fateful incident, he was already displaying his papercuts and paintings in the open air art exhibition that started in Qingdao in the late 1980s, on weekends when he was back from sea. A photo (slide 4 of the presentation) shows him displaying his papercuts and paintings in front of the cathedral in Qingdao's Church Square. Slides 5 and 6 show his surreal ink paintings from that period.

From 2005 onwards he started creating small porcelain figures through which he addressed themes of memory and experience. In 2005 he started working in Jingdezhen in a studio with another Chinese ceramic artist, and two Dutch artists. Together they would late form the 'Four Step Snake' artist group.

His chimeric sculptures, depicted on slides 8 to 17, include his Moon-Calf (2008) (slides 11 and 12) and Bird Man (2008) (slide 10). They are made from porcelain clay decorated with painted enamels which recall Wan Liya's earlier ink paintings. He described how his experience of feeling that his body is 'not ready for the changes in society' influenced the creation of his figures, which he refers to as 'the human figure reformed'.

Slide 12 shows the a Moon-Calf placed in a trash pile that Wan Liya passed on his way from the kiln to his studio: 'I thought, ok, maybe this fits my work, so I took this picture,' he says with a smile.

This same period also yielded MAO (2007), a work 'about Mao Zedong's thoughts' composed of a porcelain and gold enamel bust of Mao Zedong that can be disassembled to reveal enamelled sections of the Chairman's brain.

From 2009 on, Wan Liya entered a new period, which he describes as being strongly influenced by 'tradition' in various guises. He described his work Thousands of Kilometers Landscape (2011) (slide 24) as representative of this period. Similar in shape to his work Birds' Twitter and Fragrance of Flowers, which was on display in Ahead of the Curve, Landscape is composed of slip-cast porcelain versions of disposable containers such as paper coffee cups, toilet cleaner bottles and toothpast tubes, all covered in a sprawling mountainous landscape rendered in underglaze cobalt blue painting. The titular landscape is inspired by a 12th century painting by Wang Ximeng (1096 - 1119), a talented but tragically short-lived artist who was famously tutored by the artist-emperor Huizong (1082-1135) himself.

In SALE (2012), Wan's porcelain 'sale' sign echoes the frequent sale and reduction signs he saw during (reluctant) shopping trips. The letters are formed of porcelain openwork lattices and delicately formed flowers evocative of traditional Jingdezhen porcelain. 'In Jingdezhen'. Wan Liya says, 'there's quite a strong traditional history, so I prefer to use traditional relationship to establish the [sic] relationship between tradition and my own feeling.'

It was at this time that his work became concerned with relations between different ceramic traditions: during a residency at the Royal Delft factory in 2011-2012 he explored the historical dialogue between European and Chinese ceramics by designing Delft-produced plates bearing traditional Chinese designs (shown on slide 30 of the presentation).

Slides 26-28 show his large porcelain vase A National Treasure (2011) made for the Chinese sculpture exhibition Hague under Heaven in the Netherlands.

In Wan Liya's series New Mother, he took inspiration from highly ornate style of enamelling present on vases from the reign of the Qianlong Emperor (1735-1796) (see slides 33 and 34). On these works, Wan uses a broad range of techniques, from transfer printing to underglaze painted designs and hand-painted overglaze enamels (slides 31 and 32).

The globe appears in works such as globe abacus (2012) (slides 35 and 36) as a symbol of the interconnectivity between traditional Chinese arts and the world.

Finally, Wan Liya showed us (slide 43) a gift he made for himself for his 50th birthday: a framed porcelain tile, printed with a date of 'OCT 9 2063' as a wish for fifty more years of happynes and health. However a small inscription spelling 'FRAGILE' on the bottom of the tile gives the work a contemplative tone: after all, life itself is as fragile as porcelain.

Wan finished his presentation with a photo of himself windsurfing: 'The last image - back to the sea!' 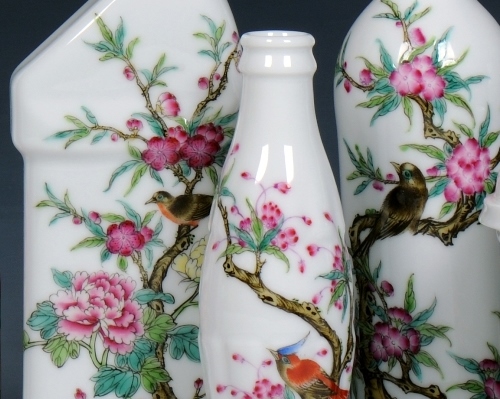