Sex workers are often pushed to the margins of society. They are rarely able to speak out about their own experiences. As a result, it is negative opinions and stereotypes which predominate. Sex workers have been, and continue to be, regarded by many as morally corrupt and a threat to public health. This has then been used as an excuse to justify human rights abuses against (mostly) women. These abuses often hide behind the idea that they are 'protecting the public'. Selling sexual services in Britain is legal, but many activities associated with it are illegal. These include: kerb crawling, soliciting in public places and brothel keeping.

â€˜As a sex worker, my safety is often portrayed as if it is damaging to the safety of women; but Iâ€™m also a woman, and I deserve to be safe no matter what I do for work.â€™

1300s & 1400s: Sex workers in Bristol have to wear a striped hood to distinguish them from other people. Later they are banned from the city and made to live and work outside the city walls.

â€˜Item that no common woman come within the town but abide still at the bars and that they wear a striped hood upon peyne of imprisonmentâ€™ The Great Red Book of Bristol, 1400s

1700s: Rules around sex work in Bristol are largely controlled by the â€˜Society for the Reformation of Mannersâ€™ and the justices of the peace. They deal with public complaints such as â€˜keeping an ill-governed houseâ€™, meaning a brothel.

Early 1800s: Sex work is common and publicly visible. There are many discussions about how to regulate it.

1859: The Bristol Female Mission Society is established by women for women. Its upper- and middle-class supporters assist â€˜fallen womenâ€™. It aims to prevent women from becoming sex workers through education and training. Over a period of 30 years, the Society â€˜rescuesâ€™ about 1,200 women and trains over 3,000 for domestic work.

1862: The Contagious Diseases Acts are passed by Parliament. The laws are presented as a way of bringing down syphilis rates for soldiers and sailors. They punish and control women deemed to be â€˜immoralâ€™. Police officers can force women they believe to be involved in sex work to receive invasive medical examinations. No evidence is required to prompt these. If a woman is found to be carrying syphilis, she is placed in a lock house and fed nothing but watery gruel while being subjected to dangerous and experimental â€˜curesâ€™ which could cause illness or death. The inhalation of poisonous mercury gasses is a popular treatment at this time.

1869: Two campaigning associations against the Acts are launched in Bristol, one led by men, the other by women. Campaigners include Dr Elizabeth Blackwell, the first registered woman doctor, and Mary Carpenter, who founded the first Reformatory for Girls at the Red Lodge. They highlight the double standard that criminalises women but does nothing against their male clients.

1929- 1962: Victoria Hughes is working as an attendant in the toilets on the Bristol Downs. The area is a well-known place for paid sex. Mrs Hughes befriends many of the sex workers there. Her revealing book â€˜Ladies Mileâ€™ is published in 1977.

1970s: Sex workers start â€˜the Sex Workers Rights Movementâ€™. The aim of the movement is to mainstream sex workersâ€™ rights as human rights and to centre sex workersâ€™ lives and experiences in policy decisions about their work.

2020s: In Bristol, fears around sex workers still cause fierce debate, particularly around more visible forms of sex work such as strip clubs and outdoor workers. Up to 75% of sex workers report experiencing violence at some point in their careers. Many prominent feminist groups in Bristol call for sex work to be abolished, while sex workers campaign for the right to work free from violence and persecution.

â€˜The only people I can rely on to keep me safe at work are other sex workers. The sex worker community have built life-saving resources, from screening lists to mutual aid groups, in the absence of protection or support from the state.â€™

â€˜Being subject to violence is not our job, itâ€™s a symptom of being consistently criminalised, stigmatised & denied the protection of civil, human, and legal rights.â€™ 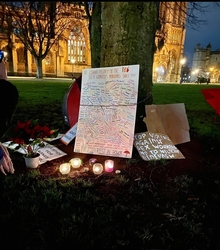