The aim of this collection is to have a complete series of maps of the city. So far, these range from Hoefnagle's 1581 map of Brightstowe to Fuller's 2014 map of Bristol. The maps show the development and expansion of the city over the centuries, documenting the history of the city as the population grew, as industries started and stopped, and as new areas were developed, from the 18th century garden suburb of Montpelier to the post-war social housing in Sea Mills.

Scales vary, and some maps show streets only, others show every building on a street and their use - even glass extensions or greenhouses in the garden are marked.

The highlight of the collection is the original drawing on vellum for Millerd's first small map of the city, dated 1671. The success of this led him to make another, larger map, and then to create the great map of the city published in 1673, showing all the buildings in perspective and great detail. In the 1673 map, Millerd showed ships and boats in the rivers, from sea-going trading ships to the local ferry taking a horse across at Counterslip - and the Talbot dogs that towed ships in to their berths.  The vignettes around the edge show the bigger churches, the great houses, Bristol bridge, the trade buildings and the plan of the river.

Bristol Museum and Art Gallery actively collects contemporary artists' maps of the city - often based on older maps, these may not be cartographically accurate, but they give another view of the city. 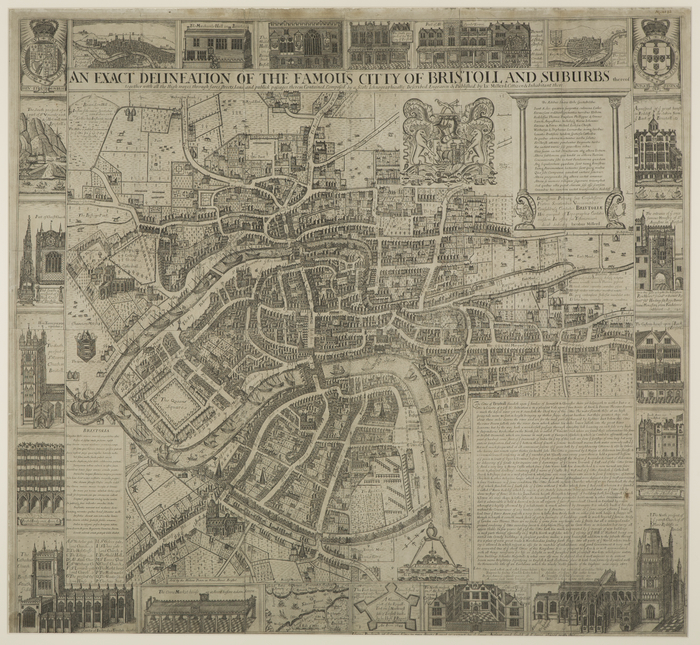 Millerd's 'The Citty of Bristoll'