The photographer is standing near to 122 Redcliff Street, the premises of Thomas Taylor, druggist, and the buildings shown are (left to right): No 25, W J Hooper, Poulterer; 26, J C Wall, agent for the Great Western and Bristol & Exeter Railway Co (directly behind these offices there were a number of large GWR sheds and loading depots, their location being not far from Temple Meads station); 27, J Wacks, printsellers; 28, J & S Powell, cork cutters, Established 1798 as the words carved into the stone above the door states. No 29, a starch works, owned rather appropriately by Alfred Stiff, is set back from the road, but its entrance is to the left of the pyramided column, where a group of men are standing. In the top-right of the photograph are the roof and chimney of no 34 Redcliff Street - see Mb6018.

Wacks is clearly the focus of attention. Its window display sets it apart from the nearby businesses, and it also has a large group of people outside. What is crucial, is that nearly all of these people are obeying the photographer's instruction to keep dead still. Elsewhere, in the doorway of the J & S Powell business for instance, or near the starch works entrance, the figures are moving and blurred. And the photographer must have cursed when the black outline started walking across his picture on the right. Some words visible on the Wacks premises: Gilder, Prints, Picture Frames, Frames Made.

Joseph Wacks was born in Germany in late-1832/early-1833, probably moved to Britain in the 1850s, where he naturalised, and lived at first in London. He set up his framing and print selling business in Bristol, originally at 31 Redcliff Street, in 1860. In 1863, he married Amelia Horwetz in London. Amelia, who had been born in East Smithfield in 1844, was the daughter of a Prussian tailor. The business became profitable, and around 1868 Joseph Wacks acquired another property, 15 Clarence Place, near to St Paul's Church on Coronation Road. This was a residential address - Joseph and Amelia had four children by this time, all born in Bristol, and any family accommodation available at 31 Redcliff Street had become inadequate. When nos 30 to 32 Redcliff Street were pulled down, sometime around 1870-71, the business moved a few doors down to the larger premises at no 27 and Joseph disposed of the Clarence Place property. At the time of the move, an advertisement in the Bristol Mercury newspaper boasted that J Wacks was the only importer in the west of England of the patent washable gilt and fancy wood mouldings for frames, and that there was a great variety of English and foreign prints always in stock. Note the unmounted prints hanging from strings in both windows and on the door. In the same newspaper, of 19 April, 1873, there appeared the first in a series of announcements stating that Joseph Wacks was retiring and selling up.

Retiring from a well-established business at the age of forty, with a wife, and four children all under the age of ten, seems unusual. Something was clearly wrong. Ten days later, on 29 April, 1873, Joseph died. The suddenness at which the retirement and selling up announcements appeared in the newspaper, and continued to appear three weeks after his death, probably confirms that he knew he was very ill.

So who was running the business under the same name when this photograph was taken in 1875? And are there any clues to the identities of the people milling around the doorway? The late Joseph's two sons and two daughters would have been aged between five and nine years of age in 1875, which rules them out in terms of running the business. But if the shop was carried on by Joseph's wife, some of the children leaning against the windows are certainly the right age to belong to the widowed Amelia Wacks.

The barely legible inscription on the glass panel just above the door of the shop states: 27 / [obscured]EUMEGEN / WACKS. On 24 May, 1873, a Mr W. Neumegen placed an announcement in the Bristol Mercury stating that he had taken over the business from the late Mr Wacks. Through the executor of Joseph's will, he had paid Amelia Wacks 600 pounds for it. Walter Neumegen, who was born in Prussia in 1834, was married to Amelia's sister, Esther, making him Amelia Wacks's brother-in-law. Before he took over the business, Walter and Esther had been living in Bethnal Green, London. After the sale, Amelia Wacks left Bristol and moved with her four children back to London (where she remarried in 1876). The story then takes another twist.

In December of 1873, just over six months after acquiring the business from his sister-in-law, Walter Neumegen sued the executor of Joseph Wack's estate, claiming that it had been overpriced and not as profitable as he'd been led to believe. The court found in his favour and Walter successfully claimed back 400 pounds, which in effect reduced the value of the business at the time of Joseph's death to 200 pounds. From the newspaper coverage, it is clear that the executor of the will had to pay, but it is possible that the executor reclaimed the money from Amelia Wacks. If so, this must surely have soured the relationship between the Wacks and Neumegen families, particularly between Amelia and her sister, Esther. Walter found a way to make the business profitable, at least in the short term. As this photograph shows, it was still operating two years after he had acquired it.

Is the smiling man with the small hat and bushy sideburns standing by the half-open door Walter Neumegen, who would have been aged forty-one at this time? It might make sense to have the business owner in the doorway. But who are the others? Walter and Esther had just one son, Morris, born 1863, but none of the male children look to be the right age.

In 1877, Walter sold up and the business changed hands again. Until 1890, it was still being run as a framer and printseller's, firstly by a Mr P Freedman, then B Freedman and lastly by Freedman & Co. In 1891, 27 Redcliff Street was recorded as empty. The following year, J C Wall, the agent for the Great Western and Bristol & Exeter Railway Company, based next door in no 26, expanded into it. J C Wall had also taken over no 25 on the other side, previously the poulterer's. Travel and the transporting of goods by rail were clearly in demand. 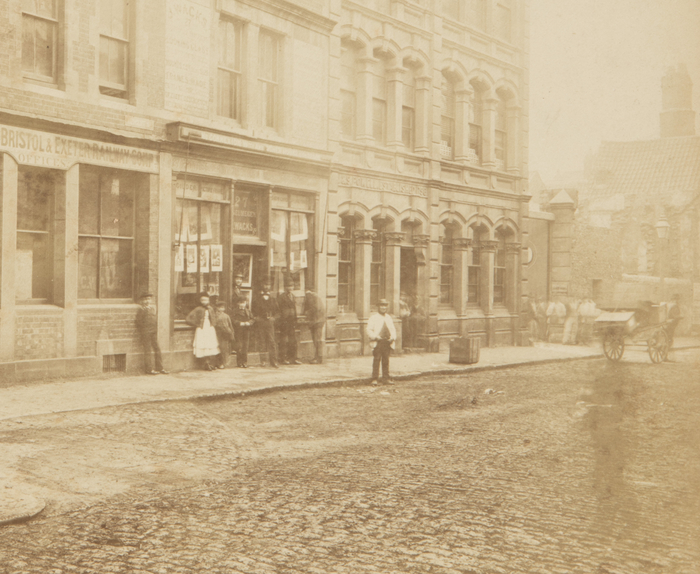 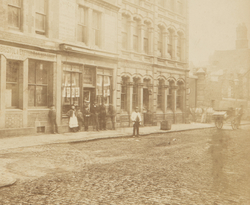 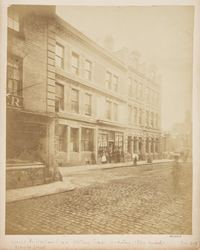 : a sepia colour photograph, showing: a view of Bristol, taken from near 122 Redcliff Street