Black-figure hydria or water jar with images of African soldiers. Black-figure ware is named for the technique of decorating pottery which gave black figures against a red background. Greek pottery was usually thrown on a wheel. Made in Greece, between about 775 and 550 BC. Bequest of Lady Harding, 1889. 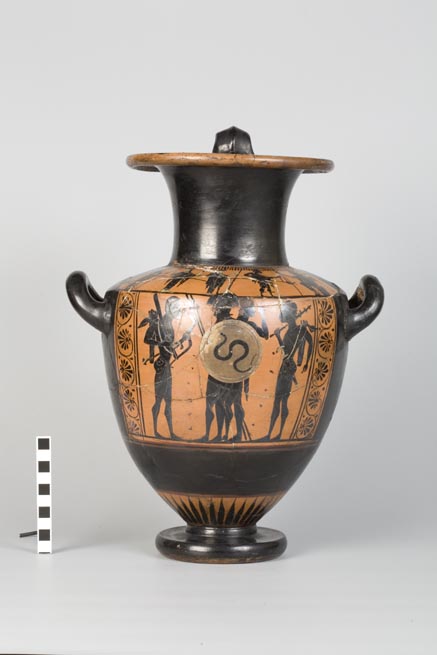 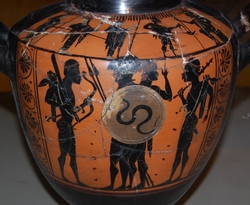 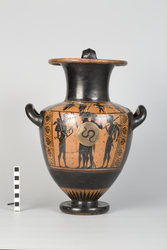 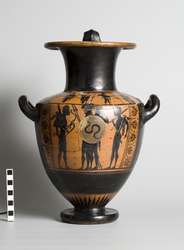 : Attic black-figure hydria (water jar) with a thick circular base, the body leading out into a wide rimmed quite tall neck with a rimmed opening. It has two small looped handles on opposite sides of the body, and a raised looped handle with two pointed projections on either side. It is moulded with a line in the centre. The outside is black apart from a scene covering a panel on the body on one side. The scene depicts two black archers framing and facing a central figure of a hoplite (warrior). A fourth figure, black as well, is on the background, behind the hoplite and turns to the right. The archer on the left holds a bow in his left hand and a club in the right, a sword and a quiver on his shoulder. The archer on the right carries a club, a sword at the hip and the quiver on his back. The hoplite wears a helmet and a shield with snake device. The inscriptions next to the archers are just graphic signs, without any linguistic meaning. In the Greek mythical world the image of the black archers is associated with the epical figure of Memnon, the hoplite at the centre of the scene. He is the Ethiopian king, son of Eos, the goddess of the dawn, and Tithonos, a Trojan prince. The myths tells that Memnon brought an army of 20,000 Ethiopian to Troy's defence against the Greeks. The shoulder of the vase is decorated with a scene that shows the judgment of Paris, one of the events that led up to the Trojan War. Hermes leads the three goddesses Aphrodite, Athena and Hera to Paris seated on a stool for his judgment in the contest for the golden apple.

The poet & the pot