'It was May 2018 the Ball & Chain was put around the ankles of the Colson statue. I had the idea a few years earlier. Iâ€™d recently learnt how to knit and I loved the idea of making some art with this new found skill, but wasnâ€™t sure what. I would often walk past the statue, finding it challenging that this figure was being celebrated without a mention of the grave monstrosity against humanity from where the wealth came from.

One day the idea just came to me, it seemed obvious all of a sudden that knitting a ball and chain to put round the ankles of the statue in red wool representing the blood lost was a brilliant idea to draw attention to the issue.

Not long after the idea, I had a thought-provoking conversation with a young man. He was telling me he was a descendant of a slave, the reason he knew this was because he had a merchantâ€™s surname. I hadnâ€™t considered this before. The slaves lost everything when taken unwillingly from their home land, even their names. The impact of this is still felt deeply now.

It was also around the time of the Windrush Scandal which was terribly upsetting knowing this cruel injustice was happening in the UK in 2018. This gave me the final push along with some supportive mates encouraging me to make it. I used modelling wire in the wool to shape the shackles.

Next was working out when best to put it on there. I asked an agile friend to give me hand, I thought about doing a secret mission at night time but we decided it was best to do it in the daytime with a relaxed approach. I cycled with my kids to meet him on a sunny afternoon. The knitting was in my pannier. I explained how I wanted it to be put on the statue and my mate climbed up the statue effortlessly and positioned it perfectly. Job done! An old man was watching us do it, I was anxious how he would react, he came over with a big smile on his face and said he loved it and congratulated us.

We sat on the benches close by eating ice creams observing peopleâ€™s reactions. It was so interesting to see it catching peopleâ€™s eyes, stopping to discuss it and take photos.

I decided to stay anonymous at the time. There were photos of it in the newspapers and on social media, it was tweeted around the world.

There was some excellent feedback and analytical comments which sparked debate about all kinds of issues. On the flipside there was also some really hateful remarks and disturbing opinions. I didnâ€™t want to be in the firing line.

I love that some needles and a ball of wool made such a powerful statement and provoked so many feelings. It was up for around 3 weeks before someone ripped it down. I am so pleased I did it and would have never had guessed the coming fate of the Colson statue a few years later.' 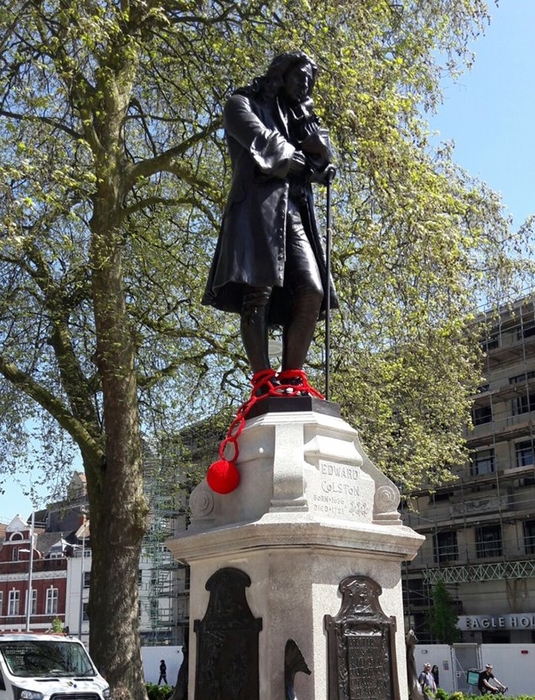