Lucky survival of the Temporale manuscript

Real treasures were used to wrap up the early accounts of Bristol Cathedral. The accounts themselves, recording the Dean and Chapter's spending from 1550 to 1900, are rare enough, but they were wrapped in 16 parchment pages from a religious song book from the late 1300s.

The manuscript probably came from a book belonging to St Augustine's Abbey. The Abbey was dissolved in 1539 on the orders of King Henry VIII. During this period, many ancient documents like these were destroyed by the Crown and by the Church of England in an effort to eradicate all traces of Catholicism.

However, because parchment was a fairly expensive commodity, pages were often recycled, in this case as covers or wraps for other books. In some cases the original text was scoured or scrubbed off so that the pages could be written on again. Discarded parchment from old texts was also used for stopping beer barrels, filling gaps in windows, cleaning guns, lining baking tins, and lighting fires. This is why intact pages like the Temporale are so rare, and so valuable.

As well as containing the order of service for the Christmas Mass, and the musical notation to accompany it, the Temporale pages are decorated with beautiful pen drawings by the medieval calligrapher who wrote the work. One is of a small dog, which may have been the illustrator's pet, or perhaps belonged to the Abbey staff. Further drawings show birds, fish and other animals. 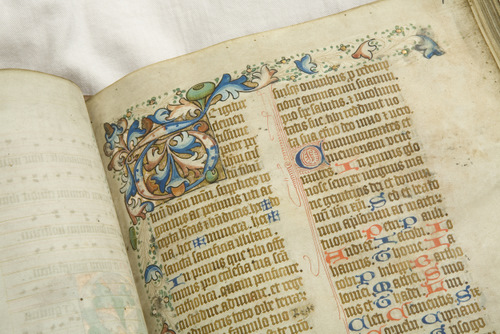 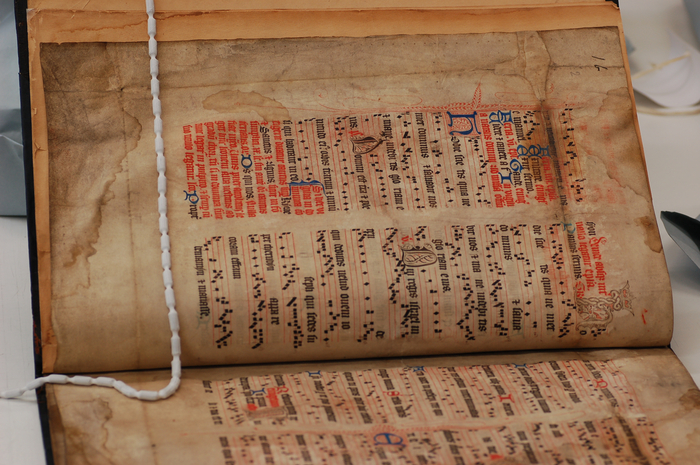