The unknown photographer has commenced his walk, and set up his camera near to 146 Redcliff Street. This is the last numbered business on the street, comprising an elaborate shop front and a simple suspended sign stating: Picton & Co. The new owner of this shop, Thomas Marsden Picton (1847-1930), was a linen draper (the premises had just changed hands, having been owned until 1874 by Daniel Harries, also a linen draper). Picton had been born in Carmarthenshire, Wales, to a family of shopkeepers. At the time of this photograph he was single and running the business with his brother and sister, John and Elizabeth. The business must have done well as Thomas retired in his mid-forties, lived comfortably in a number of Bristol suburbs and died a wealthy man in Stoke Bishop.

Just behind where the photographer is standing is the junction of Redcliff and Victoria Streets near to Bridge Parade 1, and across the street, just out of view in this photograph, are the stationery and printing works of E S and A Robinson & Co - at 2-3 Redcliff Street. On the left are the remains of a building covered in fly-posters - 4 Redcliff Street - and next to it there is a lean-to with a barely legible sign stating: DURING REBUILDING / ROBINSONS' / OFFICE & SALE ROOMS / ARE AT [illegible] VICTORIA STREET.

Robinson's was founded in 1844, and originally produced hand-made paper bags for grocery shops and account books for businesses. Partly as a result of the introduction of the penny post in 1840, the company diversified into envelopes and stationery. In 1846, the business moved from Baldwin Street to larger premises originally at 2 Redcliff Street and set about acquiring nearby buildings to continue its expansion 2. By 1876, the year after this photograph was taken, a landmark building designed by William Bruce Gingell (1819-1899) occupied the corner of Redcliff and Victoria Streets including the poster-covered remains on the left.

Some of the fly posters: Colston Hall / Whitsuntide organ recitals; Great Western Excursions / New Passage / Whit Sunday (amongst other Whit Sunday excursions to destinations such as Portishead, Reading, London, Weston, Bude, Bournemouth and Weymouth); Lee Undertaker; Exhibition of Modern Paintings at the Bristol Academy for the Promotion of Fine Arts (now the Royal West of England Academy). Many of these posters are also be seen in Mb6018, and help to date the whole series of photographs to early-May, 1875.

In the left foreground, there are two figures, possibly quite young, who have moved quickly across the road and become blurred and ghostly (more so because they are dressed in white). Near to the lamppost, there is another group of blurred figures including at least two females in bonnets and long dresses. Beyond the lamppost is the premises of Finch & Godwin, wire weavers at 5-6 Redcliff Street and next to it are the offices and warehouses of Henry Prichard & Co, oil merchants at 7-9 Redcliff Street (where the Bristol Civil Justice Centre is today). Just visible on the corner in the distance is Neat & Co, tripe manufacturers at 17 Redcliff Street - see Mb6019.

1 Bridge Parade was the approach to the west side of Bristol Bridge. / 2 See Bristol Beyond the Bridge, by Michael Manson, published 1988, Redcliffe Press. 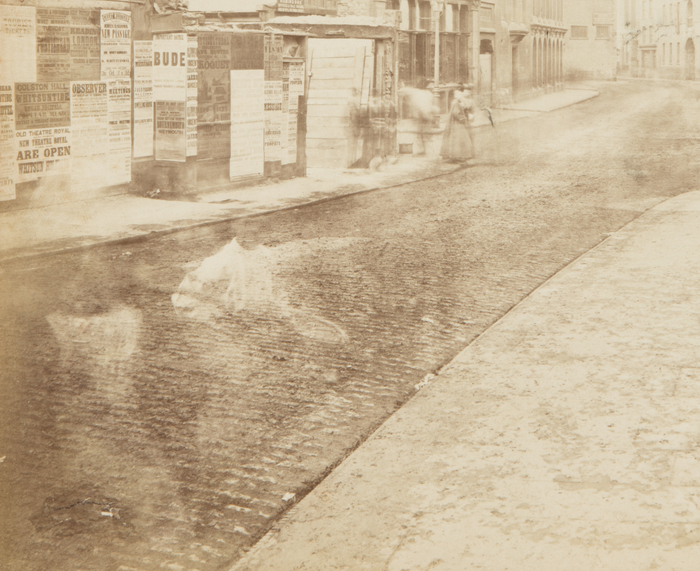 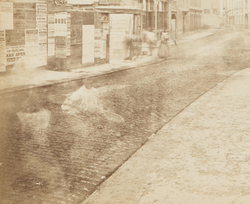 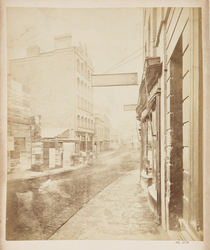 : a sepia colour photograph, showing: a view of Bristol, taken from near 146 Redcliff Street