A statue was erected in 1895, 170 years after Colston died, when the cityâ€™s elite reinvented him as a moral and economic icon, at a time of working class unrest and socialism.

Mr J.W. Arrowsmith, a wealthy Bristol businessman, had formed a statue committee but it struggled to raise the money to have a statue made, despite targeting the four Colston societies in the city at that time. â€˜A Friendâ€™ donated most of the money.

There has been a lot of debate about having a slave trader statue in central Bristol. Several artistic interventions have taken place at the site, to bring attention to the conversation. These included Hew Lockeâ€™s 2006 photo with gold embellishments, Faith Mâ€™s 2018 knitted shackles, and an Anti Slavery Day commemoration of 100 clay effigies in the shape of a shipâ€™s hull, again in 2018.

In February 2018, it was agreed that an extra plaque should be added to the statue plinth to acknowledge Colstonâ€™s involvement in the slave trade. The wording was heavily debated though. Delays meant it was never added.

In June 2020, during an All Black Lives Bristol protest, the statue of Colston was pulled down and thrown into the harbour. Four days later it was retrieved for the safety of vessels navigating the area by Bristol City Council and taken to a store. It will be used in a consultation about what happens next. 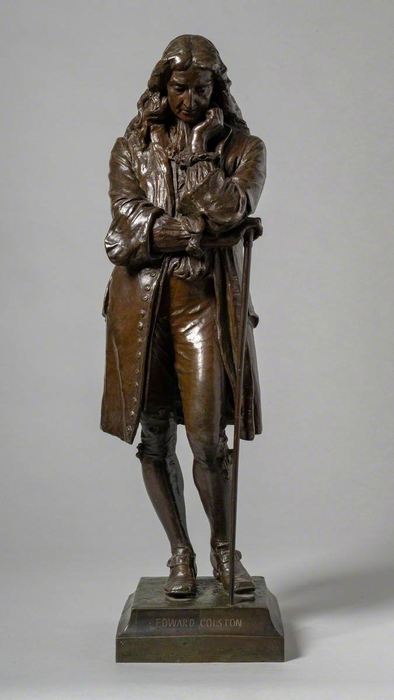